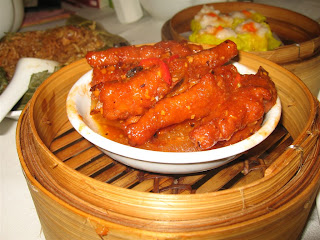 After spending our last night at the YMCA overlooking HK's Victoria Harbour, we met up with family for one last yumcha at the famous Star House Restaurant. 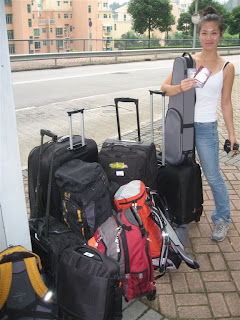 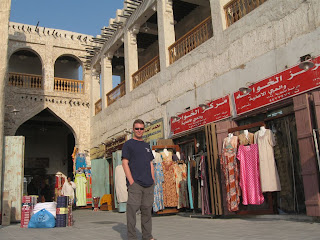 Then back to our empty flat in DB (except for the two sofas which we're leaving) to pick up all of our 11 pieces of luggage - our worldly possessions for the next 8 weeks.

See pic of me waiting for the airport bus beside all of our bags, and my most precious item of all: my violin! 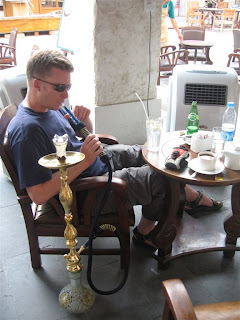 An overnight stopover in Doha, Qatar, allowed us to tour the largest shopping centre of the city and the outdoor souq.

Dry, hot, and pretty dusty, Doha is a nice mix between metropolitan and traditional.

We stopped for the obligatory sheesha smoke and mint tea before boarding our flight to Cape Town.

Note the air-conditionner unit beside our table, and we were sitting outside!
on August 26, 2007 No comments: 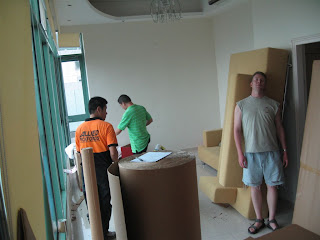 The packers are here and they're speedy little workers! You blink once and your toaster is gone. You blink twice and the books (and we've got quite a collection) and tv/stereo have disappeared! 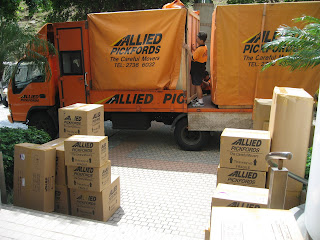 So no time to blog now, but just a quick farewell note to all beloved Hong Kong friends and family: it's been so fun, lots of good memories, countless delicious meals and an incredible personal voyage that has made me appreciate my heritage and cultural roots in a way that no other experience could provide. 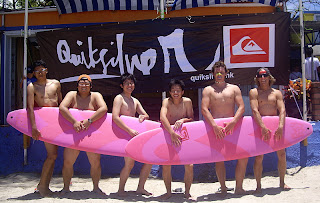 As our last weekend in Hong Kong, we appropriately spent it outdoors in the sweltering heat, surfing at Pui O Beach and playing a last beach game of Ultimate Frisbee.

Here's a picture of our Treasure Island Surf Camp Leaders proudly displaying their Quicksilver boards; Mattie, showing off his surfing skills; and Killer, our friendly camp dog, doing the same on his board - but on a wave ;) 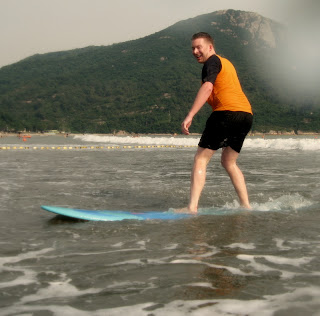 After a delicious beachside dinner at Ooh La La! restaurant, we had to retreat indoors (and become more intimately aquainted with the karaoke party that was going on, yikes!) as it suddenly started to thunder and lightning.

We've got a few days left before we leave Hong Kong, and there are mixed emotions floating around. 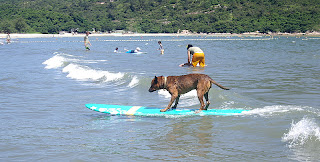 This week we are tackling the long list of tasks on our to-do chart: closing down the telephone, internet, gas, electricity, water and mobile accounts, saying our final goodbyes to friends, relatives and neighbours, settling up the flat with our landlord, and of course, the inevitable task of packing.

We've already reserved our final day, Saturday, as our last dimsum meal before we leave.
on August 20, 2007 No comments:

don't count your chickens before they're hatched 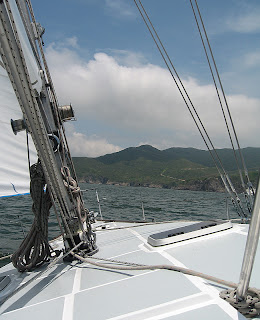 Last Sunday, under clear sunny skies and a steady Force 4 wind, Matt and I completed our 5th and final sailing lesson. Now we are a certified "Day Skipper" and "Competent Crew" member. So that was it, our final sail in Hong Kong - for a while.

Lately, everyone's been remarking at the glorious summer we've been having. Clear visibility and fairly bearable heat. And what's even stranger, no typhoons at all, only the occasional heavy thundershower.

So when news got out that Typhoon Pabuk was heading towards Hong Kong on Wednesday, everyone and his dog were bracing themselves for a ferocious incoming, only to be disappointed at a signal number 3. But then, very suddenly, it boomeranged back on Friday morning and hit HK at full force. Just to show who's in charge, i guess.

Signal #8 was hoisted at 2:30pm and as a response, chaos followed in the MTR stations, buses, and taxi queues (who charge well over the meter price because they are not covered by insurance in these circumstances). 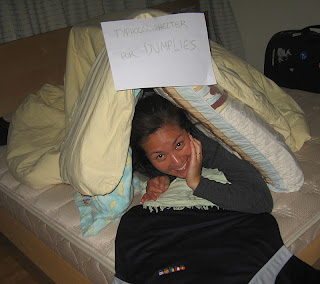 It's pretty much rule-of-thumb that once a #8 is hoisted, everyone should be heading home, no matter what. All the ferries stop operating and so those in outlying islands, like us, have to find alternate routes. However, since Hong Kong is probably one of the most rapidly-developing cities in the world, 'going home' for several million people with limited transportation options is much easier said than done.

Luckily for me, working at Treasure Island in South Lantau, i was able to hop on the bus with the other Surf Campers (who had to endure a 3 hour bus journey to get back to Central) and got a ride halfway home. Matt, working from home, quickly assessed his priorities and assembled a typhoon shelter for us in our bedroom ;) 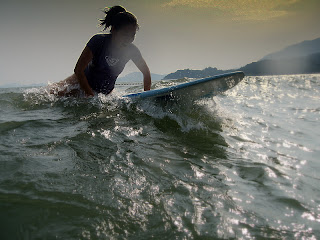 After weeks of intense heat and humidity, there is relief in the HK air as the skies open up to let, what seems like an endless supply, of water and coolness in. It sure makes for good surfing though!

I'm working back at Treasure Island and loving being 'in the thick of things'. My main task is to tweak, reshuffle and reorganize the fall camp schedule for incoming highschool students. And, when needed, i step in as counsellor for the Summer Surf Camp. There are some new staff members on board, and there are some old ones too. All in all, it feels good to be working in a team-based environment again. And, as of late, when the internet connection cuts due to the bad weather, that's all the excuse we need to grab a surfboard and get in the waves! Like ... NOW!
on August 09, 2007 No comments: