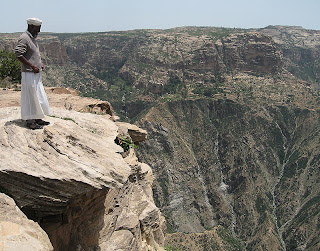 Today we went to visit Qohaito, a vast barren plateau that lies at 2700m above sea level. 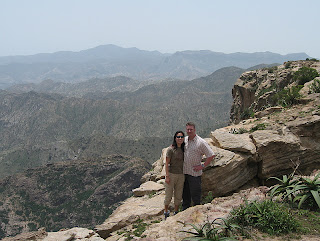 With the same friendly driver and Ghebre as our interpreter, we spent the day visiting old ruins, meeting the Saho people (one of the 7 tribes in Eritrea), and filling our lungs with the purest air imageinable. 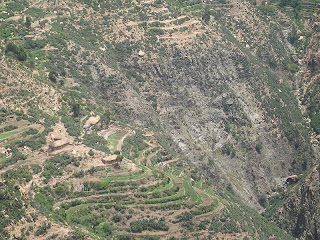 We visited the Great Canyon first and great it is!

With no fence or signs, one could easily walk off the edge if you weren't careful. Not for the faint-hearted!

See pic of our guide gazing down into the depths of the canyon and the pic of one side of the valley, where fields have been carved into the mountainside.

If you squint, you can see the tiny tukuls (thatched conical huts) where the Saho people live. 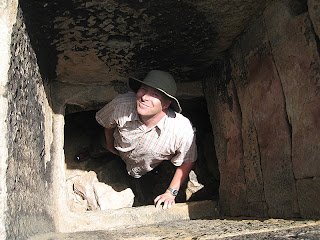 After a quick stop at the Temple of Mariam Wakiro, we stopped at the Egyptian Tomb, discovered in 1894. 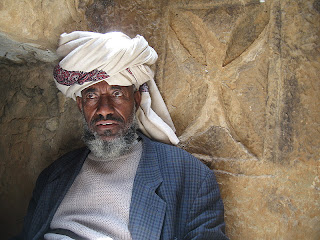 We went down into the pit where over 70 bodies were found. Its most distinctive features are the 2 flower-shaped crosses inside the walls. Here's a pic of our guide beside one of them. 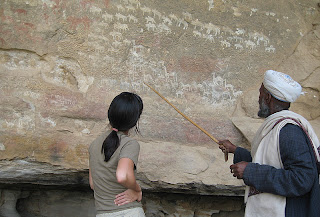 We then took a hike to see the Adi Alauti Cave and Gorge, which is by no means a very accessible site. 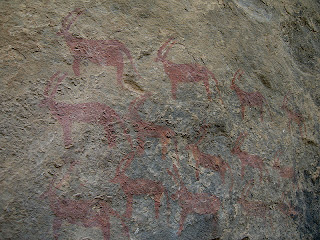 Tiptoeing on a mule trail, careful not to fall over the edge, we were rewarded with an absolutely incredible view, including Mount Ambasoira (3013 m), the highest mountain in Eritrea.

At the cave we saw detailed rock paintings from when hunters would record their catch of the day.

What i find quite fascinating in Eritrea is that everything is seeped in tradition, upheld with culture and history. But it is still a very new destination for tourists, and so the sites you do visit are there just for you it seems.

You can almost be sure that there have only been a handful of other tourists who have been to the same spot as you have.

There are no lineups, no entrance fees, no brochures and no rules on prohibiting flash photography, vandalism, etc.

Everything is just as it is, just as it should be. It's tourism at its earliest stages. 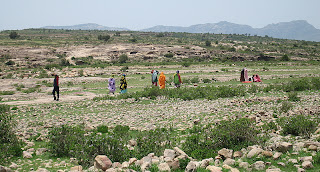 On our way back we saw throngs of women and men, all dressed in beautiful colourful clothes, apparently on their way to a funeral.

It is such an incredible sight to witness: dotted around the green-brown landscape of Qohaito are tiny figures of bright orange, red, purple, pink and blue. 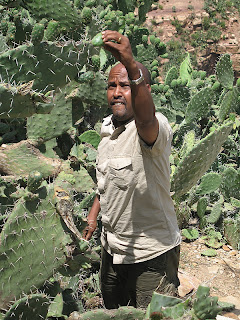 Stopping for a break, Ghebre pointed out the beles fruit to us, also known as the prickly pear. 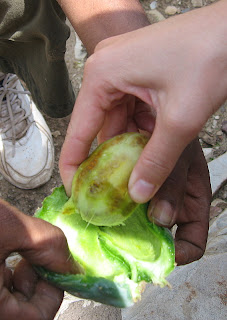 Beles was in its prime season and we had the freshest of its kind by taking it directly off of the plant.

Due to the thousands of tiny thorns on the fruit, you have to be very careful not to hurt yourself. It takes skill and patience.

Ghebre, who used to eat beles all the time while he was a boy-shepherd, showed us how to do it.

Juicy and sweet, it was a refreshing and cool treat during a hot day.

After a delicious pasta lunch in one of the only restaurants which served Coke (Eritrea's only Coke factory had shut down and supply was desperately low throughout the country), we took a short stroll around the town. 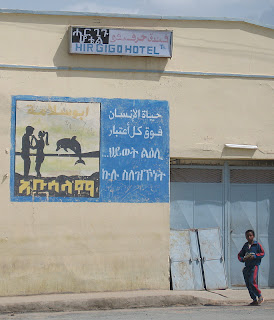 Plastered on many of the buildings are HIV/AIDS signs. It is a real threat and a growing concern amongst young and old.

Posters and billboards, such as this condom ad, can be seen everywhere. 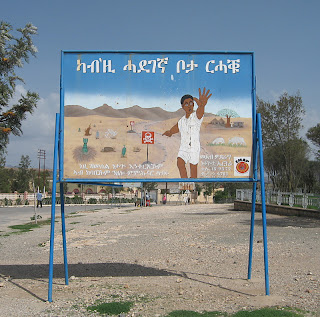 In addition, there are numerous billboards strategically placed along the highway which warn people to beware of landmines.

Since the end of the war, not that long ago either, there are still landmines which have not been found and/or deactivated.

Driving back towards Asmara, we went through the valley of the sycamores. 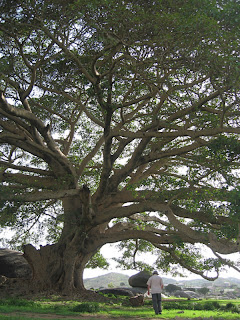 Proudly displayed on their nakfa notes, these trees are immense, sturdy and just looking at them, you feel like an ant - or even smaller.

Another full and fulfilling day.