OK, here is the Eritrea blog.. apologies for the delay, i know people were asking about it. Wanted to do the trip justice though. 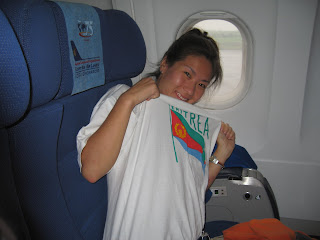 There was, in the end, no need to rush.
The Singapore connection was a breeze and the Cairo one even more so. Apparently Egypt Air is infamous for its delayed departures; we ended up waiting in Cairo's deserted connecting terminal for what seemed like an eternity. Time stands still when it's dark outside, doesn't it? 11pm looks the same as 5am and vice-versa.

We eventually made it to Asmara as the sun was rising. I had the honour of wearing Matt's Eritrea t-shirt that was given to him by Ghebre as we got off the plane (it had become a bit too snug for him after 15 years of 'growth'). 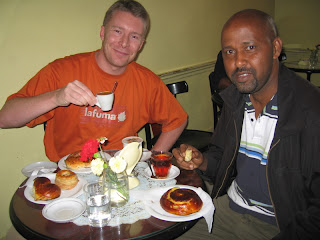 We wasted no time and after a quick shower to freshen up at our hotel, we were off to the Travel Bureau to apply for our travel permits.

All foreigners must obtain permission to venture outside Asmara. You must give details of where you want to go, for how long, by what means, etc. Perhaps a little too pessmistic, we were anxious that we wouldn't get approved. However, by 6pm that same day, we had all our necessary papers! A great start indeed. 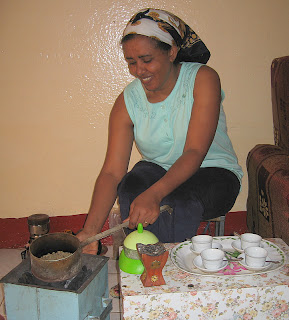 While waiting for our permits to get approved, we stopped for a quick breakfast at one of Asmara's most popular and trendiest cafe, the Sweet Asmara Cafe. See pic of Matt and Ghebre enjoying their macchiatos and pastries. 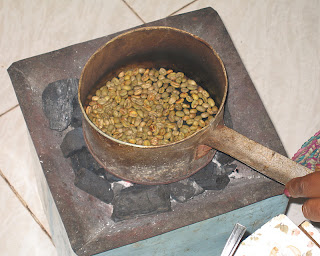 Afterwards we went to visit Nigisty (Ghebre's wife) and the kids, who were staying at her brother, Haileb, and his wife, Saba's, place. 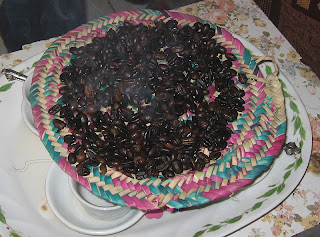 After the introductions, Saba immediately went about making the traditional Eritrean coffee. An elaborate process, the coffee beans are first roasted for everyone to smell.

Then the coffee beans are placed in a clay 'jug' which produces the smoothest, richest and strongest java imagineable!

It is then poured in tiny glasses, smaller than shot glasses, served with a few heapfuls of sugar and stirred to one's liking (the more you stir, the sweeter it is).

Traditionally, one is supposed to have 3 of these tiny cups, each one weaker than the last, but all just as sweet. Throughout our week there, we were treated to at least half a dozen coffee ceremonies. 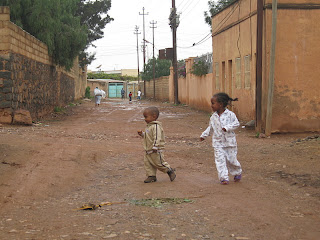 A great first day, full of warmth and sincere hospitality. It is of course that much more special to visit close friends and their families here. Eritrean culture is one that is based around the extended family, large gatherings and food. Sounds all too familiar for me! :D

See pic of little Selina and Yohanna (our Godson) playing in the street.