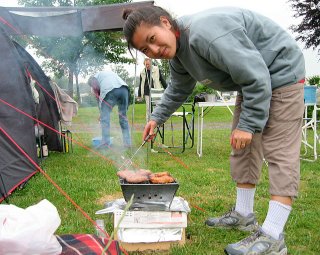 Here we are: in Hamm, Germany, at an internet cafe, sun shining, tummy full of pumpernickel bread and creamy cakes, everyone psyched for the Germany vs. Argentina game this afternoon... !!

We´ve been camping at a beautiful lakeside campground by Lake Mohenesee with Sue and Guy. Couldn´t ask for better weather, rented bikes yesterday and stopped off at a Canadian log cabin for some cold bier. Lots of good hikes too, delicious breads and cheese and cakes - omigod, heaven!

Our London weekend was good. More to come at a later date. Basically we crammed in an Eritrean christening, met with some of Matt´s friends, saw the Body Exhibition (recommended!) at the museum, and of course saw as many football matches as possible.

Tomorrow we take the train into Gelsenkirchen to watch the quarter final match between ENGLAND and Portugal!!!! We were so happy when England qualified for the quarter final, but whether they will pick up speed and actually play well as a team has yet to be determined. Nevertheless it´ll be a good rowdy game. I´ve been learning the names of the players and to toot my own horn, I´m getting quite good! We´ve got the shirts and facepaint all ready to go! Hope i can sleep tonight, I´m very excited!! 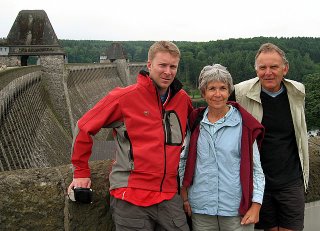 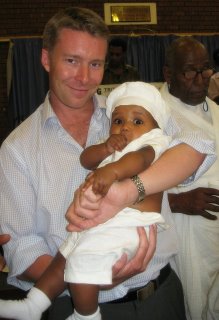 We were blessed to be asked to be godparents to one of Matt's old classmates from Atlantic College in Wales, Ghebre and his wife Nigisty. Their third child, Yohanna, a son, was born in January and although Eritrean custom dictates that he be baptised within 40 days, we couldn't make it to London until this weekend. Fortunately the family and Orthodox priest understood. What a celebration it was! After a 5 hour ordeal at the church, there was a reception with delicious homemade Eritrean food and home brewed liquor.

After absolutely stuffing ourselves with injere and curries, the band played traditional music while we all got up to dance. Pictured here is baby Yohanna's great-grandmother dancing as the guest of honour. 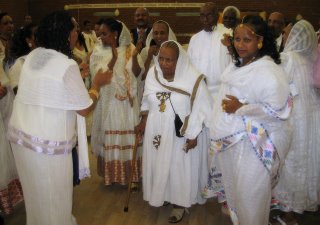 It was special to be a part of the sacred rite of passage in the baby's life. Definitely a memorable day.

We even managed to sneak out for a couple of hours to watch the England match at a friend's house. Like they say, the World Cup only happens every 4 years!
on June 25, 2006 No comments: 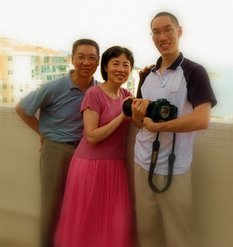 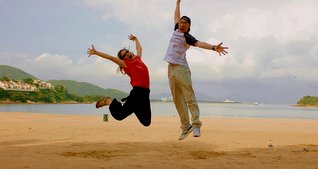 Uncle Hong, Aunt Ivy and cousin Calvin on a visit from Toronto to Hong Kong, posing on the rooftop of our flat and bounding for joy on DB's beach. Why is it always so nice to see such familiar faces from back home in my present home? The two halves merge and I realize that I am one person connecting the dots in her own world.
on June 22, 2006 No comments:

After a final interview and acceptance for my summer job at Treasure Island (more details on that later), attending my first West African drumming class (Matt and I signed up for a beginner's course that runs for 6 weeks), an Ultimate Frisbee league game where we are back on track to winning all of our matches, rushing home sweaty on the ferry, packing, squeezing in two hours of sleep, rushing to work for a hectic day of classes, scrambling to the airport the moment the lunch bell rang, I arrived in Tokyo late Thursday night, high on adrenalin at the start of an exciting long-weekend.

With a lot of sign language, I managed to buy the correct ticket and navigate Tokyo's extensive train system to Anice's place in Niiza, northwest of Tokyo centre and just over two hours by train from the airport. She had just finished work and was pretty tired but she was a good little hostess and cooked us a curry dinner. I couldn't believe how good it tasted - seriously! The last time i think i tried her cooking was a few years back when she made scrambled eggs for breakfast, or something of the like. I think I was more shocked that i was shocked, happily of course. I'll never forget it though.

Another thing I observed, although i always knew it while we were growing up, is how much neater and organized she is than me. Everything has its place and that's it, no messing about. I tend to be a bit more random in where I put things: socks and underwear in the same drawer, shirts and shorts/pants thrown on the same shelf, unhung and/or not folded at all. When you look at my sister's closet, everything is hung neatly, the fronts of shirts/pants all facing the same direction. It could be partly due to the fact that her flat is a typical Japanese apartment, tiny with not very much room to move about in. In any case, it goes without saying that her culniary and organization skills has not gone unnoticed, even from Big Sister.

We talked and ate and pretty soon we collapsed into deep sleep, only to be awakened this morning by the garbage truck doing its weekly run. It plays this ridiculous carousel tune on repeat at full volume so the whole neighbourhood can hear it and rush their trash outside before the truck leaves. The next morning I was awakened by the vibration from the man's alarm clock in the flat upstairs. You would never believe it, but it was L-O-U-D!

My first day in Japan was like complete immersion in some sort of hyper-stimulated world of busy-ness. And yet i found calm and solace in deserted parks, big crowds, my mp3 player. Walked around Ueno Park, the Imperial Palace Gardens, Shinjuku area. The next day I hit Shibuya and got lost for quite a long while. I can spend hours lost in people watching and Tokyo certainly provides one with a bigger range than you'd ever image for people watching.

Riding on the trains during rush hour i felt some sort of normalcy in joining the masses. I never thought that something so trivial could really satisfy me in the way it did; i was part of something, a movement, a flow, but not knowing a soul and vice versa. As strange as it was, it left me feeling content and still, I have to say it was when i was happiest all day.

The concert was fantastic (see previous blog entry). I met up with new friend, Natalie, who also made the trip from HK to see Ben, but she justified it by including a visit to the partner office of where she works into the weekend. We met another random girl, Renee, who was also attending the concert on her own. So the 3 of us hung out all night, front row, dancing and screaming (i lost my voice somewhere between Exodus and Walk Away). I forgot how much I love attending live concerts, such energy and beauty. 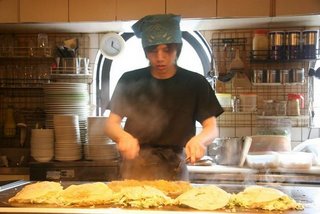 The following morning, Natalie, Anice and I met up with Naoko, a friend of Matt's in highschool. She took us to this famous okonomiyaki restaurant in the Harajuku area. We were seated in a cramped room with low ceilings and dim lighting. Infront of us was a hot grill where men in black show off their culinary skills. A show and a feast!

Back to HK later that evening, a quick 4 hour flight. All in all, the weekend's left me feeling more intrigued about how Japan is such a distinct culture within the Asian countries. Will be back soon enough. Thank you Anice for letting me crash on your floor and wear your clothes. Just like old times!
on June 12, 2006 No comments:

SO worth the trip, and the company ain't bad too ;) 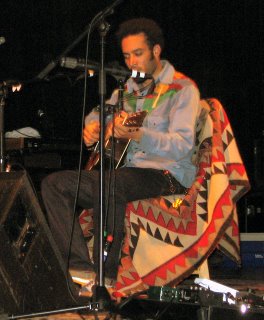 The Ben Harper concert tonight was undescribable, just absolutely fantastic... and then some. I'm sitting here speechless not knowing what to say but wanting to say it all. Ben's got this stage presence, along with his very talented bandmates, that just ooooozes with sex appeal. We were FRONT ROW, standing literally into the railings, crushed from the crowd. Amazing! Going to bed very happy and satisfied, la dee da... ;D
on June 11, 2006 No comments:

all in a day's delight

We were doing some spelling in class yesterday. Each kid gets his/her own white board with a marker and eraser. We were teaching a Year 1 class (6-7 year olds) and reviewing words that begin with 'blends' such as string & scram, and 'chunks' such as chill, short, thorn.... Us E.A.'s are situated around the room to help with the students' answers and just maintain classroom order. I was seated beside Sarah, a cute brown-haired girl with scabby legs and large green eyes. A decent speller but by no means phenomenal, she suddenly taps me on the leg and shows me her white board. On it she had written in perfect letter formation: I love you. I could hear my heart smiling and told her I loved her back.

Matt's in Hamburg for 9 days, one of the longest spells of separation for us. He left yesterday morning and although I'm super busy with work and hooray- upcoming Japan long weekend!!! i miss him so much already. And so, darling, this is my little "I love you" message on my own electronic 'white-board'.
on June 06, 2006 1 comment: