the start of another day 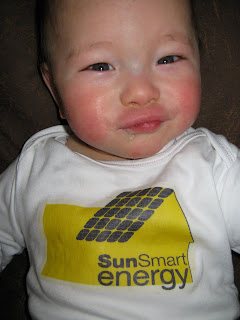 Today I woke up to a sense of real happiness and eagerness, something I haven't felt in a long long time.

I could hear Tai was awake in his cot, making the occasional cooing sound and sucking on his rabbit. 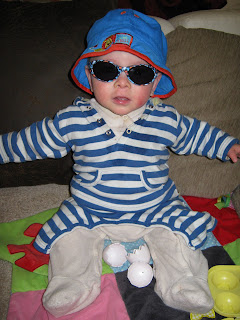 I went in before he started to cry and there he was, lying on his back with both chubby hands on his rabbit, sucking away on his ears, blissfully staring up at his mobile.

I crept into his room and just watched for a few moments. Then I stepped closer, intentionally making some noise so he wouldn't get startled. 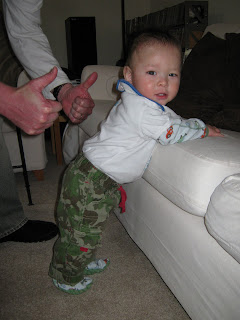 And when I peered over into his cot, the biggest 2-toothed grin came over his face and his legs started to kick frantically.

He let go of his rabbit, raised both his arms straight up towards me, pick me up Mummy!

How can such a little person evoke such joy? They just do, without knowing they do. Perhaps that's why it's extra special.

And so began another day.

* Tai trying his absolute best to help Daddy get some customers for Sunsmart Energy; modelling his summer gear in great anticipation for our upcoming Lanzarote holiday; showing off his standing skills!
on March 09, 2011 No comments: