Parenting is not for weaklings 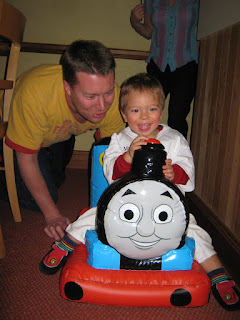 On Tuesday night, Tai suddenly start moaning and whimpering in his cot, an hour after we put him down for bed. There was nothing very abnormal to our bedtime routine. He had had a bit of a fever for the past couple of days but I put that down to teething, especially to those vicious molars poking through!

Normally we would leave him to cry for about 10 minutes, to see if he would settle himself back to sleep. But tonight I went up pretty much immediately; this particular cry wasn't 'normal' sounding.

I found him lying horizontal, foot caught behind one of the cot bars, head down in the mattress (and in what I later found was a pool of vomit). I went to reach for him, shook him gently and he was so hot to the touch. It was like touching a burning furnace.

At this point, I started to panic and turned him on his back and picked him up. He was like dead-weight in my arms, limp like cooked spaghetti and so so so hot. His lips were trembling and he was twitching a bit, but he was oblivious to it all and his eyes were still sealed shut, wincing in what appeared to be agony.

I sat down on the feeding chair and tried to 'wake' him. No response. He had little bubbles of foam coming out of his mouth. I called down to Matt to call NHS Direct. I tried to entice Tai with a bit of breast milk but no response. This was the first time he had ever refused the boob - this was serious.

After answering a host of questions on the phone, an ambulance was dispatched to the house. The paramedics arrived in about 5 minutes and they immediately checked Tai's vitals. They were super and extremely professional.

The entire time Tai was still doing his whimpering and moaning sounds, all very distressing. His temperature was over 40 degrees and his heart rate was much higher than average. When they did the heel prick test, Tai yelped and cried a little harder. This was a good sign. We stripped him down to his bare nappy and with a damp cloth, tried to cool his little hot body.

I travelled in the ambulance with Tai while Matt followed in the car. The paediatric ward took us in immediately luckily and they proceeded to take some bloods.

After a shot of ibuprofen and calpol, we tried to keep him cool and make him drink some water. No luck. About an hour later, he did eventually take the boob, but only for comfort sucking. It didn't matter, at least he was taking in some liquid.

The next few hours passed in a blur.. With a long list of items to bring back to the hospital, Matt left to go home (as only one parent was allowed to stay) and to try and get a few hours' sleep. I alternated from trying to get Tai to sleep by feeding and rocking him, to snatching a couple of minutes of sleep myself. At about 2am, the doctor came back to say the blood test results were normal, only slightly elevated which is probably due to a viral infection.

By this time, Tai was coming round and was more alert, but still very hot and clingy. He was confused as to where we were and took this to mean it was fine to explore. Because we were still trying to get a urine sample from him, the doctor told us we should probably stay the night and get him assessed in the morning again.

But by about 4:45am, Tai was definitely more interested in the toys in the ward than in studying the insides of his eyelids. He was so tired but there was just too much to keep him awake. It didn't help that the room was right next to the main desk, where the nurses and other night staff worked.

So with the doctor's permission, I called Matt to come and get us. We both thought he would sleep much better in his own cot, with no distractions. Tai's fever had come down to about 36.5 and he was looking more like 'himself'. He was even padding around the room, toddling around the round table and chairs.

By the time we got discharged, packed up our belongings and made it home, it was close to 6am and the sun was just poking through the clouds.

My mind was still racing. It was all so sudden and now I can somewhat sympathize with parents who say that it only takes a split-second for something life-changing to happen to your family. One moment you are a normal, functioning family with jobs, obligations and daily routines.

The next moment your life has been turned upside-down and inside-out. I have to admit this has made me stop and think about taking our children to a place where medical facilities are hard to come by. What would we have done if we were in the African bush or in the mountains of Bhutan?

Like my good friend Carrie said "Parenting is not for weaklings." But you don't get to find out if you have that faint heart until you've already taken the leap. There's no alternative. You must be strong.

We all slept deeply until 11am. Our first lie in in over 14 months. 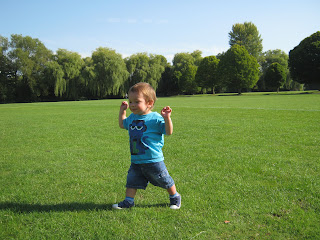 To continue the thrill of walking upright, I took Tai to our local park and let him roam free on the grass.

Are we not pushing him enough?

That's it, tomorrow we start to train for the half-marathon!
on September 02, 2011 No comments:

Today, Tai has graduated to bipedalism.

Congratulations little man! May this be the start of a long and successful journey on two feet!