Even during rain, the sun still shines 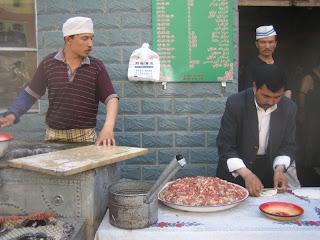 Woke up with a nose that leaks incessantly. Thank god for tissue paper.

I have been reading more and more lately. It's a nice way to relax the mind and indulge in fantasy worlds, some that aren't too far off. I just finished "Fools Rush In", a true story by Bill Carter who writes in a personal and moving manner about the war in Bosnia. He manages to, during his time as a food deliverer to citizens of Sarajevo, get the attention of U2 and have satellite link-ups from Sarjevo to their live concerts all across Europe.

It is very inspiring to hear and read first-hand what the strong-willed and passionate can accomplish. Carter has also produced a documentary entitled "Miss Sarajevo" that I want to see now. I love it when i'm inspired by these strangers whom i've never met and yet feel so close to after having read their intimate details of a time in their life. It's almost satisfying in a nosy, curious kind of way. That story left me feeling that there is good in all people, albeit you gotta scratch the surface a bit first. It also left me a bit confused as to how I could do more to help this world become more acceptable to live in, a little more peacful and understanding. 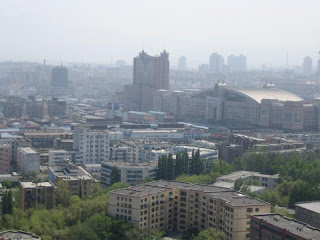 But i am more focused-inward as of late, and i'm not sure how to direct the energy outwards; to be honest, i'm not sure if i want to in the first place. It's always a prime necessity for me to have something concrete to look forward to. A date, that's all i need. Just a month and number to tell me that on this day when the sun rises, this event will happen that will break free from the shackles of routine. At least for a day, a moment. And right now that day is September 30th, when at 19:20 the plane will be taking off the runway of Urumqi Airport, transporting me into the next stage of my life, exactly 1 year and 3 days ago when i left Canada as a naive, single girl, ready to immerse herself in what Urumqi had to offer. Well, i gues you could say i immersed myself in ways i never thought possible, and now here i am, still naive but i'd like to think a little less so, but married, so anxiously awaiting the next leap. Life is a series of leaps and steps, isn't it? But we constantly move forwards, it's that inevitable thing called time. However, we do sometimes crane our heads around to remember our past jumps and strides. It's like the West African adinkra symbols, the one that stands out in my mind is the Sankofa, where a bird is flying in one direction with its head looking behind him. The symbol represents the importance of learning from the past. 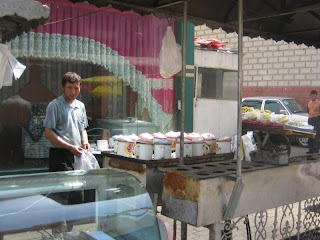 I've been reflecting a lot recently on my past and what steps and leaps i've taken to reach this point here. At some points, i've called my condition (if it's even that) as 'being antsy', but i don't know anymore. I feel that i'm more aware of time and the boundaries that are associated with it, and how i don't want to idle. But perhaps i should listen to someone who long ago, once said to me when i was rushing around, headless chicken state, doing what i, for the life of me, cannot remember now but seemed at the time so extremely vital and important: "Chill, Bon. In God's time."

Also, I will adhere to the advice of an 18-year old i was working with last year, who dared me to do something everyday that scares me or that makes me feel joy inside. Today i will write and paint and play music.

And if we're talking dates, today is a celebration in itself: it's our one-month wedding anniversary!
on August 29, 2005