With Love, from Japan

Below is my Dad's mass email to friends and family around the world, describing his thoughts and impressions of Japan. I pretty much agree with what he says and thought i would post it here, to also give another 'voice' to this blog:

Hello All, After almost a week of travelling here in the ultra-chic urban area and the countryside, I am not just looking for the contrast of the old and the new, but also the wondrous, the exotic and the unconventional. Sometimes, the unexpected or the illogical encounters seem to be dubious, it is borne out of a culture of bias and outlook of a western North American society.

To quote the Insight Guide of the Discovery Channel, it is a unique place. Through the history of the land of the rising sun, Japan has adopted and adapted the best from her neighbours, such as the philosophy and writing from China, the Korean art and ceramics to the advances of the western technology. Along the processes, she has maintained its individuality, through her culture and people. It has become the second strongest economy over the years (and only surpassed by China recently), its infrastructure, development, and trade have created a high standard of living. You will find it expensive and yet people are willing to spend. Its recession of the last decade has gradually seen the light with the stock market registering double digit gain over the last two years. Yet the high value of the yen curtails many visitors from North America. 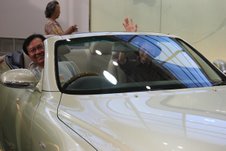 In my travels to different countries, the most striking and attractive highlights are the local people. To touch the surface, the distinctive well mannered behaviour has amazed me. Not just saying the usual Thank You is suffice to describe how citizens respect each other and care for the society. The unusual bowing of the train conductor to the passengers at the entrance and exit of each car speaks to the well discipline of the company's policy and yet the deep devotion to tradition and honour.

The unusual cleanliness of the environment and any establishments project the image of an advanced and developed state. The seemingly low number of public garbage can allows the populace to dispose habitually intelligently. With a 21st century equipped warm toilette, one can hardly feel the cold underneath in the winter time. With also sophisticated projectiles, the modern day toilet sure keeps you clean from the top to the "bottom".

Alas, the dominance of the Japaneses auto industry can be witnessed at the huge Toyota show place where one can test drive any available domestic cars, see any available latest models which become part of the North American models in a few years, examine and ride some future concept cars, and experience the whole universe of hybrid, Formula racing, safety equipments and the general knowledge of automobiles. In summary, it is an enlarged Ottawa Auto show by itself.

The acceptance and advancement of the western culture are uniquely Japanese. The willingness to compete and excel in this tight world market place yield unparallelled efficiency and accuracy, of which I suspect the high sacrifice of workers sometimes becoming slaves of time.

In this short window of time, I am amazed of what I have witnessed and experienced. As the owner of the new Nikko Lodge where we spent a night in the mountain resort, Kent portrays the new spirit of entrepreneurial after spending 35 years in Colorado in the States. As his very first Canadian guest, he has shown great care of ensuring us properly looked after, including a lesson of Yoga with a monk at 7am. 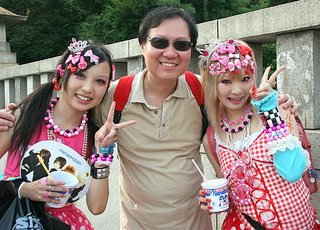 Well, we are now on the way to see more of the love of western cult in the Shibuya where the Harajuku girls dish out their ultra modern fashion and the Japanese Elvis' will do their twist.
Sayonara for now and talk to you again.
Cheers and take care,
Kam