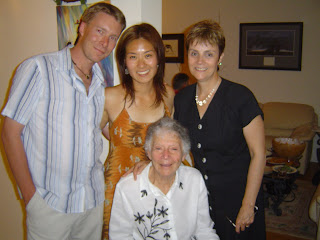 Like clockwork: once a week, on Friday afternoons, for almost 10 years straight.

That is how many times I saw my violin teacher, Rosemonde Laberge. I just found out that she passed away late this summer, and although she was quite old and frail, it still saddens me.

I would walk the 20 minutes to get to her house, violin clutched in my hand. I would greet her dog, who never quite learned how to "sit" or "be quiet", and we would talk about school and family before warming up with some scales.

In the beginning, I was petrified of Rosemonde. Scared of the mistakes I made and how I never really practiced everyday like I said I would. When she lapsed into French, I knew i was in for it. But as the years went by, and as I matured and hit my teenage years, our relationship deepened. She was a constant part of my week, something that was certain when life seemed to be in adolescent turmoil.

It's funny though. As much as we focused primarily on the study of the violin, the theory and the dreaded examinations for all those years, the image I hold most fondly is the one of her indulging in a cigarette, sitting in her rocking chair, dog on lap, and us chatting away.

When I left Cornwall, to "see the world" as she put it, I would return from time to time and we would again sit and catch up on each others' lives.

She always called me "Miss Wong from Hong Kong!" though little did we know I would be living there later on in my life. I sent her many postcards from HK and signed them just like that.

It pleased me to no end when she made the trek to Ottawa in July 2005 for our informal wedding get-together at my parent's home. See pic of her and Therese (cellist friend who also accompanied me on piano during exams) with us. It was the last time I would see her.

Only now can I begin to understand and appreciate the value of having Rosemonde while I was growing up, as my teacher, my mentor, my friend.
on October 02, 2007