Beijing, the familiar and the ever-changing 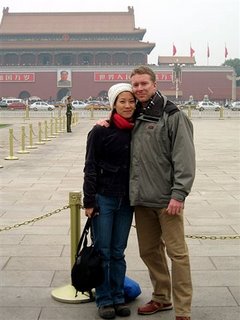 A terrific long week-end in Beijing! With temperatures hovering around 13 degrees in the day, only to drop to a chilly 5 degrees at night, it was great to be able to wrap up in layers and jackets and tuques again.
We stayed at the incredible Bamboo Garden Hotel which I highly recommend, and this is saying a lot! It takes something quite drastic or awesome to really surprise/wow me, but i have to say my first impressions of the Bamboo Garden Hotel was shock - in the best of ways. The rooms were like brand new with gorgeous antique furniture and careful craftsmanship and ornate light fixtures (on the verge of gawdy, but passable). The gardens were simply gorgeous, with little pathways, fountains and persimmon trees. And this was all set amongst the hutong area where the high walls enclosed the peace and tranquility within. I think what shocked me most was that this was in CHINA, and having learned to not expect such a thing in this country, it was a pleasant surprise to see i was proven wrong. 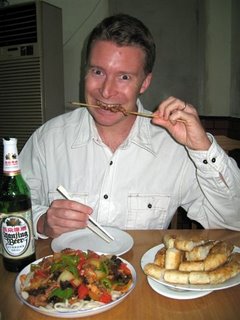 We arrived late Friday night and went out immediately in search of food. As luck would have it, just on the other street we found a little local Xinjiang restaurant, and so began the feasting on mutton kebabs, naan bread and banmian. See pic of Matt chowing down on greasy sheep fat.

We rented bikes the first two days, touring the city and watching life go by. I have never really cycled Beijing before but it is by far the best way to really get a glimpse into local life. We met with my old host family for dinner on Saturday. It had been a few years since we last met and it was indeed very good to have them meet Matt. They were, of course, smitten by his extensive Mandarin and charmed by how much younger he looked in person! 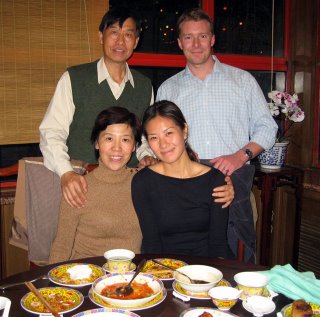 We went up the famous Drum Tower and saw the Asian Games Torch being passed down the main street that connects the Forbidden City and the Drum tower. Olympic fever was everywhere and we remarked that Beijing had made some significant improvements on their transport systems, taxis especially. New cabs and buses could be seen, and taxi drivers didn't even try to cheat us once!
We woke up early on Sunday morning to catch our 6:30 train to a nearby local town, southwest of Beijing, Shidu. Known as "the little Guilin¨ because of its mountains and deep gorges (Shidu literally means Ten Gorges), we hired a car and driver and visited a couple of sights, hiked up one of the gorges to a waterfall and rented a bamboo raft at the river. 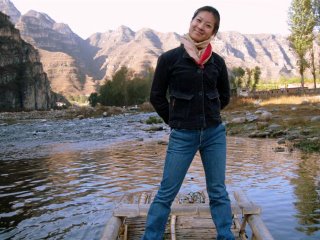 We ended off with a greasy, oily lunch of deep fried local legumes, deep-fried mini shrimps and an eggplant and minced beef dish literally drowning in oil (see pic). The cook had left the previous day and the restaurant was actually supposed to be closed because tourist season was over, but the woman kindly let us in and did her best to cook up a good spread. It was good while we ate, but we settled on a no-oil, no-grease, no-deep-fried-anything dinner that night. 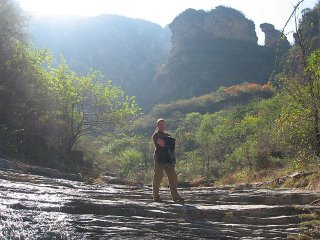 I flew back Tuesday night and on our way to the airport, we stopped by friends' Thomas and Basia's place for a home-cooked Korean dinner. They live in probably one of Beijing's most luxurious condos; large open rooms with high ceilings and big windows, a western kitchen, and even a jacuzzi! The last time i saw them (and the first time too) was just a little over a year ago when they came to Xinjiang for our wedding. They are still outdoor and travelling enthusiasts and are planning a trip in May to Tibet by the new rail-line and then to Nepal. 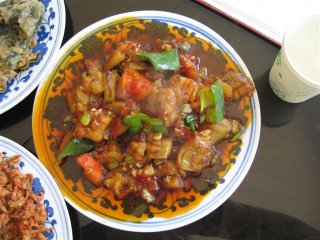 Matt and I reluctantly parted ways at the airport; he stayed to attend a conference and I had to go to my teaching practicum school back in HK the next day.

So ends another mini adventure, one of familiar sights, sounds and smells, and yet i was surprised by how much the city has advanced and developed over the years - the number of HUMONGOUS buildings is astounding, all so grand and imposing-looking. It's definitely a dynamic period of change for the city as they prepare for the much-hyped Olympic games in 2008. I think it's worth another visit then.
on October 25, 2006