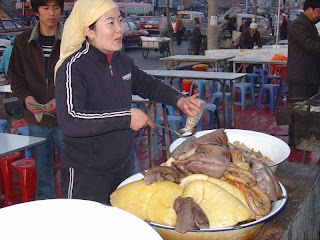 Last night was my last Sunday I will be teaching at EF. I am weekend-free, baby. Well, i've still a few classes to finish off but technically I'll be doing it as a part-time teacher, and during the weekDAYS. It feels fantastic. It's also a bit strange as this is the first time in my life where i'm not in school and/or working at some organization/company. I am the master of my own time. It is extremely liberating.

Ever since i've handed in my resignation at EF, I've been receiving these random and some not-so-random requests to learn English, some from students, friends, friends of friends, and friends of friends of friends of friends. You get the idea. I don't want to take just anyone so i've been quite picky as to who i'm actually taking on. What's more interesting is how I've been approached by quite a handful of people wanting to learn FRENCH! There is a huge market here for learning foreign languages other than English, it's kind of astonishing. So anyways, here is a great chance for me to brush up on my French and to relive my days as a French teacher when i was at Bowmore PS. Not to mention at good ol' Rockland!

I've got a class of 6 students starting next week, every Tues and Thurs for 2 hours each time. All adults, Uyghur, most are married and with children, most of them work for the international company called 'Carrefour', the French grocery chain. One of them is an English teacher at a local Uyghur Language School and his reason for wanting to learn French is that "French is the most romantic language in the world". Or like we'd say "la langue d'amour." This will be a great chance for me to pick up a few Uyghur words and phrases. I'm hopeful and excited. 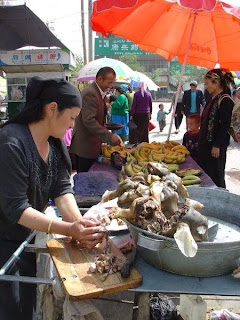 As the Urumqi ex-pat community is so interconnected, I've also managed to score another student through grapevine connections, an eager 23 year old who will be going to France to study in the fall. With pretty much zero French knowledge, it will require some hard work from both of us to bring her to par in order to pass the exam at the French Embassy in Beijing in July. This morning we had our first lesson here at home (I've decided that having the students come to our home is easiest; this also translates to zero travel time for me). We have a really good deal: she'll come everyday in the morning, 5 days a week (Mon-Fri), and after 2 hours of hardcore French, she will teach me some Chinese, from the textbook I have and also just conversation stuff. A job for me, but i'm also learning in the meantime - killing two birds with one stone. We get along really well and i'm just really happy, not to mention relieved, about that. What's more, her English is not that great so I get to practice a lot of my Chinese with her anyway. I just really want to become fluent in spoken Chinese and am not too interested in the reading or writing. It hit me hard while we were drilling "bonjour, comment ca va?" that we were actually using three languages interchangeably, quite a concept for my brain to get used to.

Learning Chinese has been one of my big goals for coming back to China, and i have to admit i've been slacking in that department. I think I need to find some sort of activity outside of the classroom so that i can utilize my learned Chinese. Joining a band, a sports club... with locals ???

I've also decided to continue with one of my little VIP student, Jollery, twice a week. She's cute and adorable (is 12 yrs. old but looks about 8) and really takes a liking to me, as does her mother (whom i've taught once). It's nice when students form this personal attachment to you, cause it happens the other way around too.

My biggest worry about leaving EF and free-lancing was that I'd become bored. Some say that doing nothing is still doing something, but there is a limit. I don't want my days to be wasted by just puttering around. I know it's ultimately up to me to decide how to best utilize my time. Definitely keeping my feet in the teaching world is important to me, and learning Chinese, but to also do something in the creative field, like keeping up with piano and continuing to struggle with my guitar... ah, so many things.... I have to also realize that the next 6 months are quite busy with a visit from Estelle (early April), a visit from parents and sis (mid-april), the Labour Holiday in May, our trip to Jersey and Canada (last half of July), Matt's parents visit in early September... and in between it all, planning a wedding! So keeping some allocated free time will be crucial. But in the meantime, having my students pencilled in on a weekly basis will provide me with structure and routine, something that I do require to an extent in order to feel 'productive'. 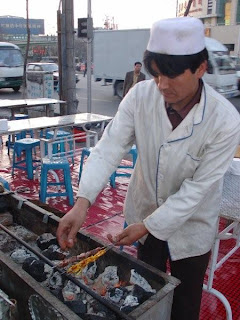 Another awesome door has opened just when i handed in my resignation... a friend of mine, Cath(erine), who was also former EF teacher and actually the mastermind behind setting Matt and I together... has received approval for a small grants scheme from the British Embassy (she's half british, half Chinese), and we are going to be co-project coordinators on a development project up in Yili, the north of Xinjiang.

Details are still being ironed out, but essentially we will be helping to expand a current project that is run by friends of ours, called HOUSE OF HOPE. An elderly couple has taken in 5 children (mainly orphans, disadvantaged and at risk) as foster kids, putting them through school, giving them an 'up in life' so they can find work later on. They want to eventually expand to 10 kids, so part of our grant money will go towards helping them get more resources and hiring an extra pair of hands to help around the house. In addition we will be starting a woman's training centre where we will have 4 women trained as professional bakers who will be able to bake and generate an income for themselves. They will also be required to go to school and learn life skills. It is our intention that these women will also take other apprentices under their wing the following year, to keep the project sustainable when the grant money has run out.

Anyways, Cath and i have never done anything like this before, and although i've had my share of NGO work/volunteer, this is something that is quite exciting and as we've already discovered, challenging. Since she is living up in Yining, I am considered the Urumqi-arm of the project, and perhaps just as important, the relayer of Urumqi-expat-gossip during lengthy phone conversations, it's great. I'm super excited, and everything just seems to have worked out well, getting some private students to make some pocket money but also getting back into development work, and best of all, having more free time and flexible hours.

Tonight i'm having the students from my adult class over to have a graduation-ceremony/ thank-you-for-being-such-a-great-class party. We'll make pizzas with nan and bake em in our oven!! Yup, we have this new mini oven that is also a grill. Although the microwave is also a substitute 'oven', for some reason i can't get over the fact that one must microwave a cake, whereas it should really be baked in a conventional oven. Just one of my quirks i guess.
on March 21, 2005