food for the belly and mind 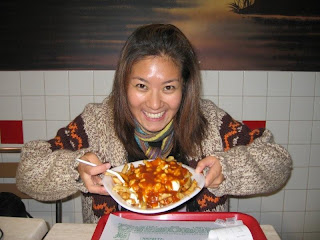 Spent a great, wet, damp, two days in Montreal visiting Andy (Pandy - sorry just had to do it!), a dear highschool friend who also made the long trek to Urumqi for the wedding.

On the way there we (Allison and i) were driving in a snowstorm which then turned to sleet and then rain. The ground was slushy and walking around downtown St. Denis and St. Laurent was just a brutal reminder that you just can never tell with the weather in November. 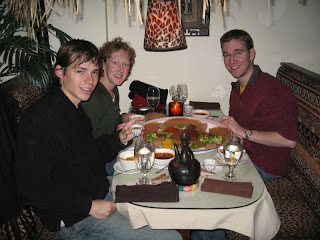 Andy read my mind and immediately suggested we go for a big fattening plate of greasy poutine for lunch, and then for Ethiopian food for dinner. This morning we went out for crepes and i bought a dozen Montreal-style bagels to bring home.

Ah, what's not to love about this fabulous city - the thought of wanting to live there for a while crossed my mind several times, it truly is a great place where there isn't the stress and pressure of 'success' like there is in Toronto but people seem to do their own thing, do it well, and enjoy life in the meantime. Great boutiques, art and book stores, cafes, restaurants, all with a flair of their own. We ended up chatting a lot about China; Andy and Allison had toured Beijing with my sister Anice the week before the wedding, and then continued on the silk road by train with my parents and sis (and partway with the Thornington crew too) after the wedding. Being first time Asia-travellers, they enjoyed the trip and had great pics to show for it. So nice to see the glow on their faces when they were telling me how they overcame certain obstacles such as bargaining for a fake Rolex watch, how they now view Buddhas in a different light, how they equally loved and hated being treated like superstars, and just how their experiences in China have changed so many perspectives on life. 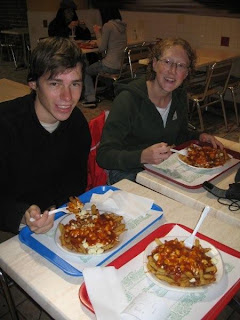 Andy shared with us his master's project and although i don't dare try to repeat what he told us for fear of getting it all wrong, all i want to say is that i'm super proud of him and that he's one of those other people whom i know will go places, and as a side note to myself, should stay in close contact with ;)

Met up with Simon, Matt's cousin, who lives in Montreal and runs his own business. Lots of fun that night, and we topped it off by going to a hookah bar: middle eastern decor with techno Turkish tunes, perfect!

Tonight i attended a presentation at the National Press Club near the Parliament Buildings, where there was to be a guest speaker who was sharing his experience as a captive in a Saudi Arabian jail. I noticed an ad in the 'Ottawa Citizen' paper a few days ago and decided to attend even though i had only vaguely heard of Canadian citizen William Sampson and his horrendous experience. 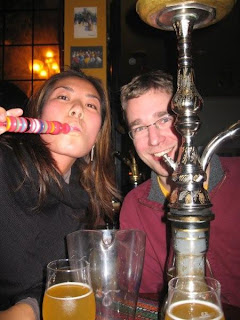 Back in 2000 while living and working in Riyadh, he was suddenly captured outside his home, taken to prison, tortured daily for 964 days, and forced to confess to 'crimes of terrorism' which he did not commit. Upon his release, which in itself is an incredible story of how corrupt our governments and how hypocritical our politicians are, he has writen a book and is now suing his captors/torturers. Probably one of the most powerful and moving presentations i've ever attended, i was most taken aback at how easily he spoke about his ordeal, as if in the third person, and how passionate he is in righting the many wrongs in our justice and political system.

I've missed having the opportunity to attend such talks and panel discussions that are offered in the community. I'm eager to find similar setups and forums in Hong Kong, where strangers can gather in an open and safe space, share knowledge and ideas, create awareness and enact positive change.