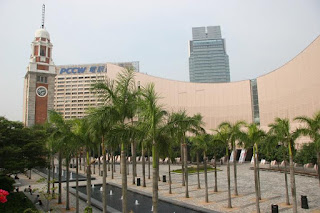 We finally got around to celebrating our "first meeting" date (Dec.6, 2006) on Friday. Since we met in a Japanese restaurant, we decided to keep the theme going and went to the famous Okinawa restaurant, recommended by YK, and then saw "Letters from Iwo Jima" (which won Best Sound at the Oscars) at the cinema. Emotionally sobering and well worth seeing for its effects and educational value.

After a very very VERY lazy Saturday, we summoned the energy and went to see the Youssou N'Dour concert, part of the 35th Hong Kong Arts Festival. We bought our tickets back in December upon hearing he would be coming with his band "Super Etoile de Dakar". It was exactly what i needed after a day of doing absolutely nothing. I still get amazed at how music can alter my mood instantaneously and this was no exception.

Youssou has a voice that has been described as "pure velvet" and it's true, the man must have a set of hidden lungs under his beautiful flowing Senegalese shirt. We were up in the balcony and the majority were sitting throughout the whole performance, and so those who did get up to dance during some of the songs blocked the view of those behind. After putting on our best "convincing face" we still couldn't manage to get down to the lower level to join the other dancers. We ended up sitting a bit closer to the stage which was better than nothing.

I still find Hong Kongers a strange bunch of people to go to such concerts with. Firstly, the venues that are chosen are obviously not for acoustic sake but on the number of people it can hold. The Cultural Arts Centre is, granted, a gorgeous example of superb HK architecture (see pic of Cultural Arts Centre with famous clock tower), and it's perfect for a philharmonic orchestra where the acoustics and sounds are second to none in the Concert Hall, but it was just not meant to house a fast-pumping show of electric guitars, African drums and intimate African singing and dancing. Secondly, a lot of people just seem uncomfortable in their suits and heels, not knowing if toe-tapping or hand-clapping is considered out of line with the concert code of conduct. I love watching people who simply give it their all and dance and clap and sing, truly unleashing any anxieties and simply enjoying for the sake of good music. Love it! 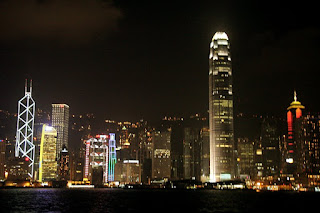 It was a great show and afterwards we took the Star Ferry across Victoria harbour (see pic of HK's brilliant skyline at night), went out with some of my uni buddies, and over lychee margueritas and nachos, we caught up on our MTP (main teaching practice) experiences and of course gossiped and complained about "The System" of HKU and our program and... I'll not bore you with the details.

Today was a day out in the open field playing Frisbee with friends and now thoughts are heading towards this week's lessons and projects. But first: sleep.
on March 04, 2007

December 6, 2004, at that sushi restaurant in Urumqi: Edo no Sakura... I remember it well. I still go there every now and then, for what it's worth.

I was there, sitting across from the two of you at the moment you first were introduced. And while I hadn't realized that Cat had deliberately intended to set the two of you up, it was pretty obvious to everybody else from that first minute where things were heading with the two of you.

Glad that the two of you are together, still recognizing that date. Wishing you many more December Sixes. Hope to see you again, somewhere, before long...