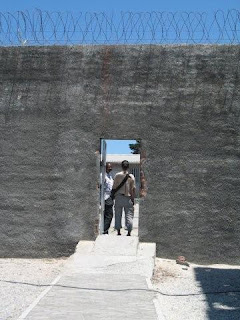 Today was a full-on day.

We joined the 10:30am tour for Robben Island to visit the infamous prison where Nelson Mandela spent over 2 decades of his life.

Now a museum and UN World Heritage Site, we took a 30 minute ferry journey to arrive at the dusty, shrubby island. See pic of Anice talking to our guide beyond the prison gates. 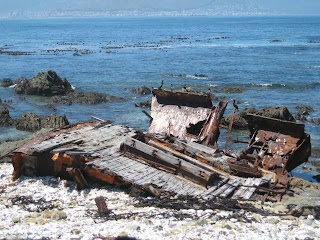 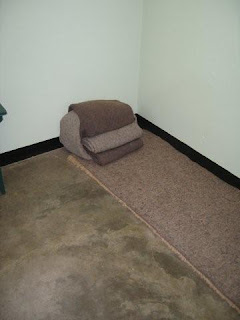 known for its institutional brutality. The duty of those who ran the Island and its prison was to isolate opponents of apartheid and to crush their morale. Some freedom fighters spent more than a quarter of a century in prison for their beliefs."

Lead by an ex-political prisoner, Sparky, we joined fellow tourists on a 45-minutes island tour by bus (see pic of shipwreck, one of many scattered along the coast) and then, by foot in the baking sun, walked around the prison grounds and had a glimpse into Mandela's modest cell (see pic). 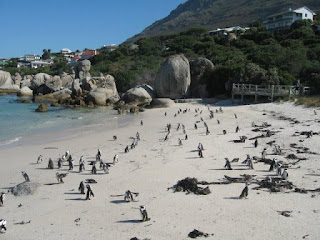 We were quite disappointed to find out that the cells and corridors had just received a new coat of paint. Many people in our tour group expressed similar views, saying the original condition of the prison should not be tampered with. 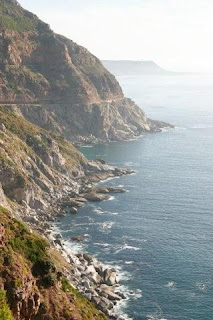 Nevertheless, every visitor to Cape Town should experience Robben Island for themselves, if only to gain a glimpse into the struggle of the freedom fighters, of South Africa's turbulent history, and hopefully to realize the importance and necessity that "Never, and never again shall it be that this beautiful land shall ever experience oppression of one by another" (Nelson R Mandela 1994).

After a fast-food lunch at the V&A Waterfront, we decided to 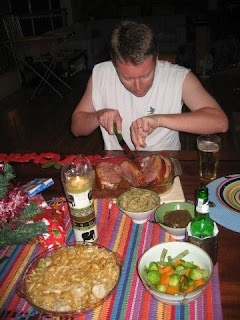 pay a visit to Simon's Town penguins (see pic) before driving back on Chapman's Peak Drive (one of the world's most scenic marine cliff drives, see pic).

Back home again and while packing for our big roadtrip, we decided we should still have a proper Xmas dinner even if we weren't going to be home on the 25th.

So at around 8pm we started to cook a ham and other tasty treats.

It was well past midnight before we sat down for our xmas meal, but it was worth it. 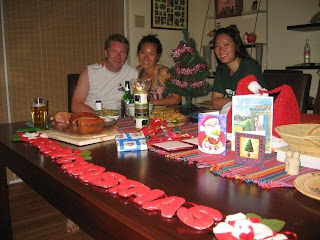 Who knew a ham took several hours to cook?!

It was huge too, but we managed to bring it along on the road and for the first few days we had ham sandwiches for lunch and dinner, and even a few bites at breakfast.

After filling our bellies and opening all our presents (we unanimously decided it would be a hassle to cart them around with us), we finished packing and tried to grab a couple hours of sleep before leaving the next morning at 5am.