Wrapping up, but still enjoying the now 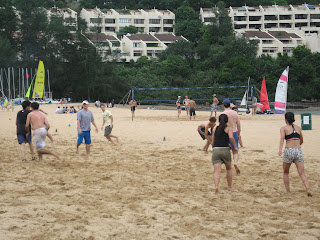 It's been a while, i know. No reason except time passing. 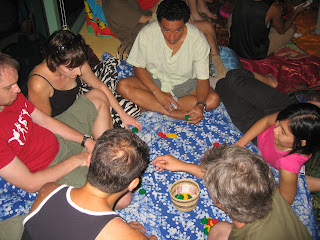 Last Monday we had the first beach disc game of the year here at DB. Afterwards, we all trampled back up to our place for dinner. 17 large pizzas, 6 dozen samosas, 5 cakes and countless cans of beers later, the Wii was brought out along with the poker chips. 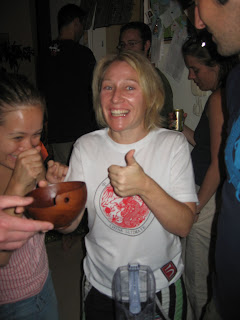 Oh, and of course we brought out the ceremonial kava, a big hit for its curious effects but not particularly popular for its mouldy-shoe taste. See pic of Christina and Naomi giving the thumbs-up after bravely downing their bowl. 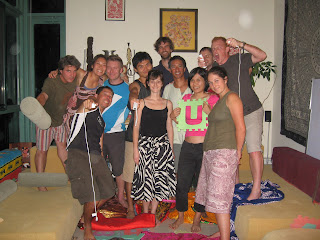 It was a good night; I wouldn't have guessed 40+ people could actually fit into our living room, but everyone did eventually get somewhere to sit - be it the mattress, floor or table top! See pic of the last of the guests. 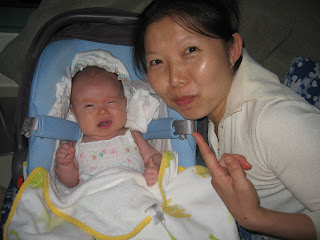 One of our frisbee friends, Apple and Alex, just had their daughter Elizabeth a couple of months ago. She made her grand debut that day, a real cutie and a half!

These past couple of weeks have been very low-key, getting back ino HK life, trying to enjoy the hot and humid summer by swimming almost daily. To get back into our exercise regime (and to hopefully knock off some of that "travel weight" that is inevitable when you're in another land and eating like a queen), we have joined a weekly dodgeball team. Yes, the game that we all played in primary school where you try and hit as many people with balls. It's fun, intense and fortunately, pain-free! 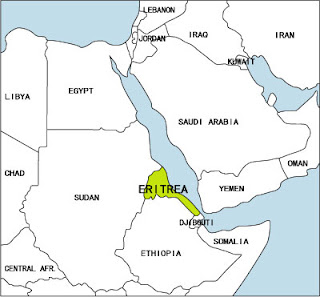 Our Eritrean visas have come back, after an initial rejection the first time applying. We leave next Tuesday, via Singapore and Cairo. It will be a fantastic trip, i'm sure of it. Very much off the beaten tourist track and a short, but intense glimpse into the political, historical and scenic beauty of a small, 'new' country still struggling in its own ways. Because Ghebre and his family will be our tour guides for the week, I have to admit I haven't looked much into what there is to do there besides visit the old ruins and the coastal villages. All i know is that the food will be splendid, the coffee to die for (their macchiatos are world famous) and if Ghebre and his family are anything to go by, the people will be very hospitable and friendly.

On July 1st, it was the 10th anniversary of the handover. We intended to go and see the fireworks but in the end, comfy couch+movie+wine won hands down over crowds+heat+more crowds.

Trying to capitalize on all the arts and theatre in town during the HK summer, we went to hear Joshua Bell play Tchaikovsky's Violin Concerto in D Major Opus 35, my all-time favourite. I've heard it performed live about 5 times by other violinists, but young and talented Joshua Bell is just light years ahead in terms of melodic interpretation and making technically difficult passages appear like a walk in the park. What more can i say, except that it was so utterly fantastic that i wept throughout the enire thing. 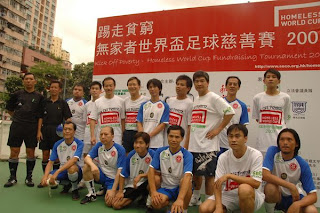 Last Sunday we went to see HOMELESS FC at one of Hong Kong's independent movie theatre. A fantastic film/ documentary about Hong Kong's homeless people who've met under unique and difficult circumstances, these 8 men formed a football/soccer team and travelled to Cape Town for the 2006 Homeless World Cup. Inspiring, emotionally vivid and extremely 'close to home', the entire piece is very well done and as much as i hope it will get more international recognition, i hope this will become integrated into the curriculum in all local schools. It covers a host of issues: poverty, discrimination, family and social issues, friendship, pride and beneath it all, survival. 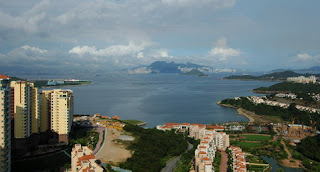 Lately, I've been making a mental list of all the things i will miss when we leave Hong Kong. Among some of the top things is the view from our flat. 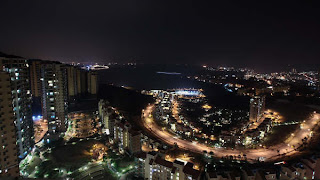 Whether at night or early morning, the lights, the outlying islands, the fog, the haze, the clouds, the typhoons, even Disneyland - they all come together to make up what I will cherish as my HK memory years to come. 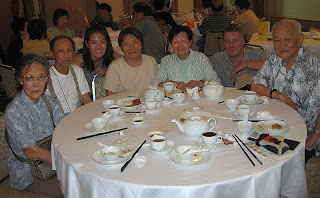 I think i'll end this entry by talking about the most apprrpriate thing: food, the variety and the availability of it. We went out for dimsum in Tuen Mun with several great-aunts and great-uncles a couple of weeks ago. Oh, i will miss the clattering of the dishes, the ridiculously loud people shouting and heckling and of course the small steamed dishes of siu mai and har gao, fish heads, pork fat, chicken feet and pig's intestines... What can I say? You can take me out of China but you can't take the Chinese outta me!
on July 10, 2007