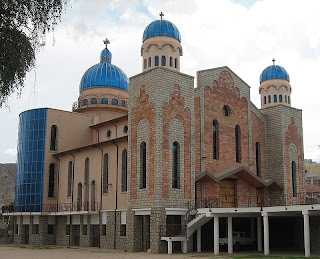 After a little lie in this morning, we decided to take a public bus to Keren city in northern Eritrea.

Set on a plateau 1392 m above sea level, it is known as one of the country's most attractive towns, hosting a range of mosques, churches and colonial buildings.

Scattered along the route were battered and worn tanks, left over reminders of the brutal war fought not that long ago. 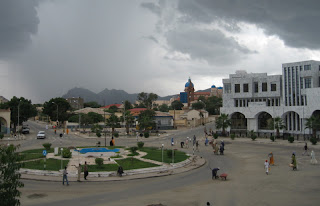 Here in Keren, the Bilen people are found, beautiful and famous for their large gold nose rings and henna tatoos on their necks and faces.

Because we left so late in the day and due to the 5+ hour journey each way (if you include the waiting around at the bus depot for the bus to fill up), by the time we arrived in Keren, it was pretty much time to turn back. 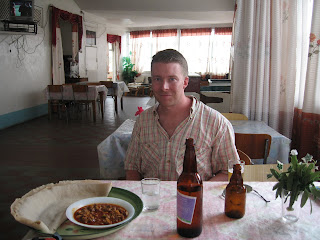 We managed to squeeze in an injera lunch, see Matt waiting to dig in.

For dessert, we stopped by at a local cafe known for their home-made yogurt and donuts. We slurpped and munched while watching "Eritrean Idol". No kidding. Too bad it was all in Tigrinya. 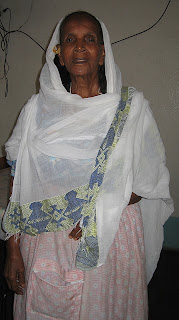 Here's a pic of the restaurant owner, a lovely Bilen woman. She was beyond herself with delight when i showed her the picture on the digital camera. We took multiple shots of her, with her daughter, with me, etc.

Back in Asmara, we went out to one of the famous pizzerias and had possibly one of the best tasting pizzas ever in my life.

It's fascinating to think that after all the war and damage done over the years, the food lives on.
on July 21, 2007