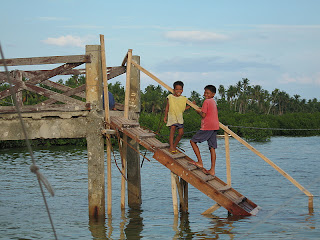 It's simply incredible how we can wake up at Neo Horizon (our apartment) in Hong Kong and only hours later be on a tiny remote island in the beautiful Philippines.

We flew 2 hours from Hong Kong to Cebu, took a 1.5 hour ferry to Tagbilaran on Bohol Island, transferred for 15 minutes by van to Panglao Island and then took a 45 min bangka (motorized outrigger boat) ride to Balicasag Island (it's so tiny, it's not even on the map). Just as the sun was setting and the sky was illuminated with gorgeous deep hues of purple and pink, we arrived in our little nipa hut.

That night we feasted on grilled lapu-lapu and an entire deep-fried pig's leg (see Matt pre-pig-binge with his signature San Miguel). 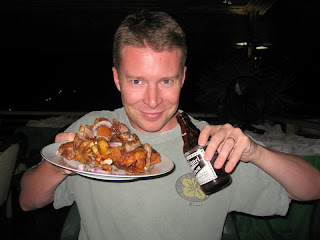 The next day we went diving and with an impressive 25 m visibility (better than Hong Kong's 2m!), saw an incredible variety of colourful fish, turtles and coral. See pic of enormous school of jackfish passing us overhead, bright blue starfish amongst a coral bed, and a clown fish (or Nemo, as they're more commonly known). 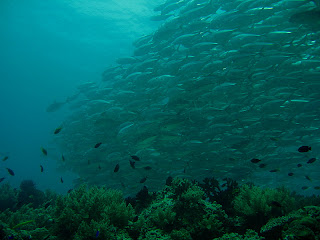 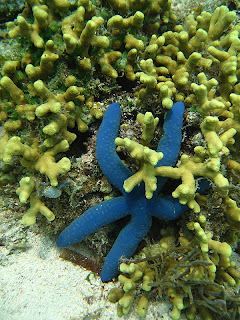 In the morning we visited Royal Garden and Diver's Haven in the afternoon. 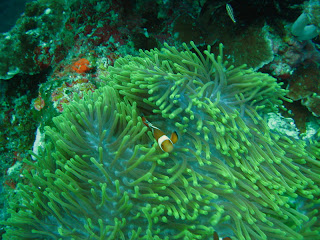 Unfortunatley we weren't able to spot any baracudas or sharks like we had wanted to. However, we were warned by our guide, Raoul, about the vicious triggerhead fish who are apparently in their nesting phase and so bite anything and everything that comes too close. At one point i was in my own little state of underwater awe and didn't see one close to me, nor did i notice their (Matt and Raoul's) warnings or attempts to get my attention. Lucky for me, i wasn't worthy of even a nibble that day. 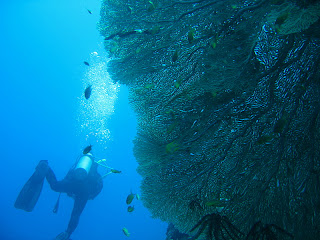 Diving makes you incredibly hungry and we had one of the best meals after rinsing our gear and searching manically for Matt's snorkel and mask (never to be found) was the grilled squid and prawns on the open bbq. Served with sticky rice wrapped in leaves, we washed it down with a cold mango-banana shake, a daily staple of our holiday. The Philippines is absolutely bursting with diferent varieties of fruit, most of which i don't know the names of but i can say with absolutely certainty that their mangoes have got to be some of the juiciest i've ever tasted. 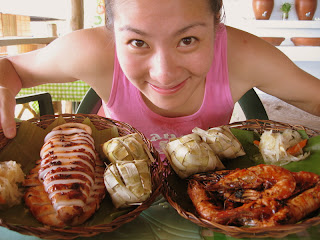 That evening, we travelled back to Panglao Island and checked in at the Bohol Beefarm in Dauis. Truly one of the best places i've ever stayed in, this little paradise within a paradise follows the simple philosophy of supporting "an agricultural development that leads to healthier soils and diverse agricultural ecosystems, conditions that help promote a better environment. One that we hope would be populated by a happier and healthier people." 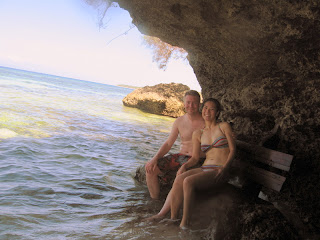 Serving organic food from their garden, employing over 70 young people to give them a headstart in the workforce (all employees are expected to work in the admin part of the hotel as well as tending the fields in order to gain more skills), the Beefarm has truly mastered the art of sustainable eco-tourism, organic farming and beekeeping with practical work opportunities for locals.

Some of the little treasures about the Beefarm are the private swimming cove (see pic), the organic garden salad (with edible flowers), the squash muffins, the mango spread and the sweet corn coffee. 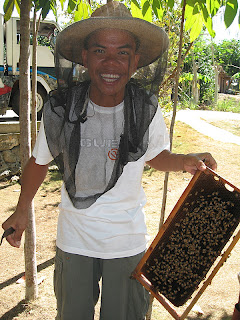 We took a tour of the farm and our happy guide proudly showed us how honey was collected. Did you know that all worker bees are female? And that all male bees are only used for reproduction, after that they're left to die?!

The next day we rented motorbikes and chugged our way to the famous Chocolate Hills in the interior of Bohol near Carmen city. Since Matt let me lead, i set the speed at a stunning 40 km/hr, but considering it was my first time ever to be out all day riding my own motorbike, it was the perfect speed for me.

We went past several gorgeous and imposing churches, built when the Spanish were here in the 16th century. Starting from our hotel at Dauis and passing through Bool and Baclayon, we turned inland at Loay and passed Loboc town and Bilar, eventually reaching our destination at mid-day. 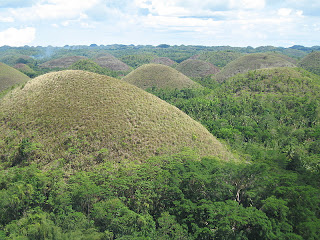 The Chocolate Hills are huge mounds, over a thousand of em, all pretty much identical and although they aren't exactly a chocolate colour, it is pretty impressive. Caused by water eroding the limstone rock that lies on the bed of clay, it has become one of the must-see landmarks in Bohol. 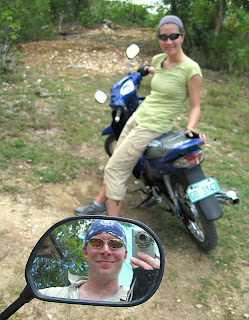 During our motorbike trek, we took a mini deviation to check out a reputable hostel mentionned in our Lonely Planet, "a truly unique place ensconced in the jungle on the edge of the Loboc River" where the 16 cottages are completely integrated into the environment.

However the road leading to it which branches off the main road "is a rutted dirt path". No kidding. Going down was no problem for me despite the steepness and rocky boulders. Coming up I lost control after hitting a huge boulder and the bike came down, just narrowly missing the steep plunge down the hill on my left. Lucky, there was no major damage, just a few scratches on the bike - and a very worried Mattie ;) I think i'll perfect my smooth paved-road riding skills first before attempting more steep rocky hills. 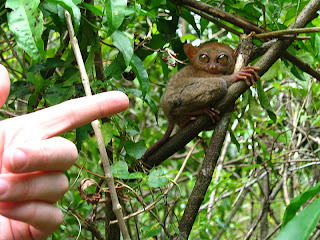 The next day we took a taxi to visit the Philippine Tarsier Foundation, a conservation and research centre aimed at protecting this smallest primate in the world. They are as cute as they appear in the picture, with eyes 150 times bigger than a human's in relation to its body size. It can leap 5m in the air and turn its head almost 360 degrees! I was amazed at how close we could get to these adorable creatures. 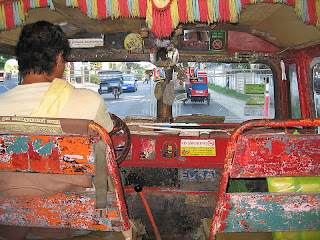 We decided to try out a local form of transport, the Jeepney. Gutted entirely in the inside, decorated with words of God and colourful paintings on the outside, and adorned with dozens of lucky charms on the dashboard, these truly unique vehicles are equipped to squeeze as many passengers in as possible. 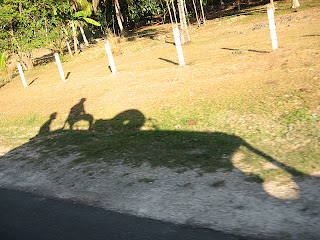 Our Jeepney, which was originally designed for probably 14-15 people, managed to hold almost 30 - and everyone had a seat, believe it or not (if you count the roof and someone else's lap). 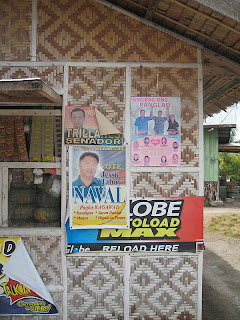 On Monday, it was election day and all eligible voters were off to the polls to choose between 12 senators, 250 congressmen, 81 governors, 81 vice-governors, 770 provincial board members, 118 city mayors, 118 vice city mayors, 1510 municipal mayors, 1510 vice municipal mayors, 1322 city councillors and 12092 municipal councillors! No wonder there were so many posters and signs and banners plastered on every wall, vehicle and tree! 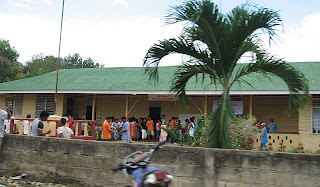 Unfortunately, as i read in the paper today, there was violence and killings during election day and a huge undeniable amount of corruption and bribery. It will take weeks before the results are announced but i sincerely hope that some goodness will come out of this election. Despite it all, i heard that voting turnout was over 80%! 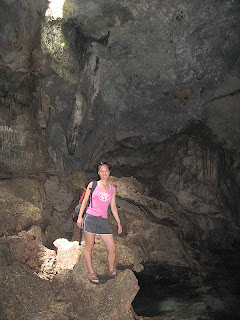 Our last stop before heading back home was at Hinagdanan Cave, accidentally discovered by farmers. Although the LP says you can swim and snorkel in the half-salt-half-fresh pool, there was enough bat poo dropping down every few seconds to make you instinctively decide otherwise. Still, it was very interesting with the stalactite and stalagmite formations; it looked like a set of a horror film.

What struck me most about the Philippines was how many Filipinos were travelling themselves. You get the usual groups of Japanese and Koreans, but the majority of them were Filipinos, in large boisterous happy families. Perhaps they were coming back home from overseas for a visit or perhaps they do take the time to actually explore their own country and considering the diversity in all 7000+ islands, who wouldn't?

If you think you haven't seen enough pics of our Philippines holiday,