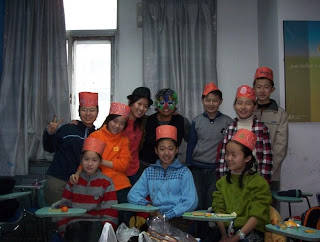 I love weekdays - i can be as lazy ass'd as i want to be.

Attempted to watch "Collateral" with Tom Cruise ;) last night with Peta in her flat. Her DVD player is a unique one: it only plays the background sound, there is no dialogue except for the subtitles. So strange, we even tried another movie but with the same results. We didn't feel like reading at all, so we watched it in my flat. Sometimes i love the fact that we live so close to one another. Went to bed around 3:30am and woke up at around 9.... It's great to not have to go into work until much later. I'm quite enjoying the absolute freedom we have at EF to come and go as we please. As long as our planning and prep work gets done before the mad rush on the weekends and you do your extra chores during the week, nobody bothers you. So far today, i've been playing guitar, baking banana bread (susi's business class is cooking dinner here tonight and she promised to have desert for them courtesy of me), writing, surfing, eating.

As i had predicted, the spa was fantabulous last Friday. Cheap (about $10CDN in all) and fun, this is certainly a great way to endulge and do some serious self-care. Laura and i went from hot showers to hot tub to sauna to steam room. Last time Laura went, she put up a fuss about being naked and after a lot of persuasion, she was allowed to wear her bathing suit. However, because she was alone (her BF Ryan was in the male section of the bathhouse) she found it a bit awkward to be amongst naked Chinese women who were lounging around the hot tub and sauna. And according to her, some were completely liberal and then some about giving her full frontal views, legs spread and all. Nice. So we got to wear our bathing suits without any opposition this time since they recognized her. For about $3CDN extra, we got a full body exfoliation, where i swear they scrub every single square inch of your body and without giving graphic details, one has got to be utterly comfortable with one's body in order to fully appreciate this experience. However, at this point we were told to take off the bathing suit, oh well, when in Rome... After getting up from the table and upon seeing all my dead skin she had sloughed off, i was totally disgusted. After another hot shower with hair salon shampoo and soap, we were given soft yellow cotten pj's, yellow underwear and yellow slippers. We were then showed upstairs to the dining room, reunited with the boys who were adorned in cute blue pjs and blue slippers and probably blue undies. After sinking into a chair from pure elatedness, awaiting us was a full buffet spread - unbelievable! There was soups, noodles, rice, fruit, fish, chicken, tofu, veggies, cold appetizers, DESERT, drinks.. 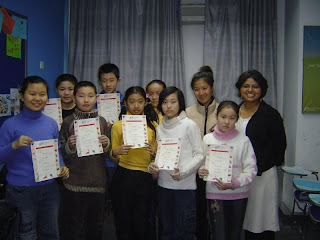 I rushed home afterwards to welcome Mikal, the new teacher from Czech. First impression: tall tall taller. He towers over everyone at 6'5. Great sense of humour, has been in Australia for the past few months, has travelled in US, Malaysia, all over Europe, loves nature, skiing, cycling. First time in China, he marvels at the little quirks that make China CHINA. Ie: the clap on lights. To save electricity, many of the lights in the offices and stairwells of buildings are sounds sensitive. To turn them on, you can clap your hands, stamp your foot, or as i've heard some people do: yell "HAAAMMPHH". WHen Mikal discovered this light system, he was quite amused and giggly. Funny how quirky things like that become the norm so quickly.

Sunday night was Ken's birthday. After teaching 4 full blocks, which is 8 hours of actual teaching time, (my first time where i haven't had a break in between, quite intense and i've gotta learn to pace myself or i'll burn out by my last class), we all went across the road to the ORANGE STREET BAR for some drinks. It was a great ol' time, we spent 1299 yuan which is quite excessive even for us foreign folk, but hey it was fun. At this bar, they have live musical acts that play a set or two, and then different people come on. In between acts, Ken and i jumped up and played a little duo. Me on the ivory keys and Ken on some guy's guitar. He attempted to sing also, which basically means him ad-libbing words on the spot - hysterical, and upon reflection, a bit embarassing. I honestly don't remember exactly what we were playing but after a few minutes we were politely told to leave the stage. At least we weren't kicked out.

Sunday was also Tonia's birthday, the Centre Manager of EF Urumqi. She came to the bar with some of the other girls, and we toasted her with rounds of vodka shots. Chinese women/girls have this cutsie way of having fun. I don't know how to explain it, but it's like this innocent/naive/selfless nature that is very girly and giggly. One of the course consultants (CC's are assigned to various classes at EF to be the liaison between the teachers and parents), Amy, would perform this little dance number after each shot, she would stand up, kinda shake her boobs and do this batwoman thing. You have to see it, but she would make the "peace sign" with her two hands and sort of wave them across her face. God, it was funny.

I had two of my kiddie classes finish this weekend. During the span of one course which consists of 16 classes, there are two parent observation opportunities. One happens in the middle of the course and the second one happens during the last class. These two classes i was co-teaching with a local teacher, but parents only observe the foreign teacher's class (something i don't agree with to begin with, but anyways). So during my parents obs, we played games, handed out candy prizes, sang songs and i gave out progress reports to the students. And then parents can ask questions about their child and sign up for the next level. It was my first time ending a class and it was so chaotic. Every mother and father, and sometimes the grandparents come too (!) want to know everything about their child, and i get the feeling that all they want to hear is the foreign teacher boasting in front of the other parents about how hard-working and bright and amazingly god-like their child is. Maybe someone might say i'm exaggerating but honestly i don't think i'm too far off. The pressure is unbelievable for these kids to excel to the standards that their parents and society places upon them.

This rat race to be successful and maintain individual pride and consequently, family dignity, is contagious, equally competitive, and a lot of times it can lead to a detrimental lack of self-confidence and just a miserable state of being. I see how the young kids have a spark and glow in their eyes, but my older students, the teens and especially the adults, tend to be more like robots on auto-pilot, gliding from school to school to textbook to workbook to exams to work. I gave my adult class an assignment last week to do something FOR THEMSELVES, anything that makes them happy, just for 1 hour the entire week. One student played basketball, another had a birthday dinner celebration for her Grandma, one went out to eat with her parents, one went shopping. During the last half hour of class I taught them the lyrics to Hotel California by the Eagles. It's quite popular here in Urumqi and they wanted to learn an English song. Variety is great and sometimes the textbook is a bit dry. I brought my guitar as did Hugh, a student in the class, and we had a sing-a-long at the end, funfun!

I'm still trying to unravel the layers of Chinese people and figure out what it is that makes them so hard to read on the outside, and if and how they are striving to this so-called success. As an outsider, i'm frustrated at the fact that they seem to internalize this pressure coming to them at all angles, but from what i gather, the most destructive is the pressure that they self-impose for whatever reasons. Peta was telling me that as of today, there are no trained psychologists in China! But despite it all, there is this intriguing facet of Chinese people that binds them together, that of national pride. And the powers that be up in Beijing try so desperately to keep these outlying provinces and minority groups under their iron fist as much as possible. But the more you force it, the more assertive people can become and thus why the Uyghurs here cling so dearly to their Uyghur identiy by defining themselves NOT as what Uyghurs ARE but what they are NOT. And what they are not is Chinese.

Perhaps this opening sentence in the CHINESE History course textbook here at the University of Xinjiang will illustrate what i'm trying to say:
"Xinjiang is an inseperable part of our great and glorious motherland."
- What does one say to that? -
on November 30, 2004