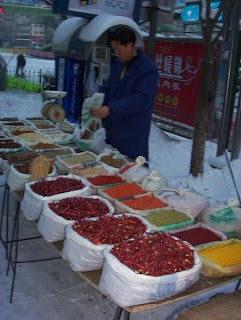 Health status: after resting a lot, drinking copious amounts of hot water, getting drugged up and getting a lot of TLC from concerned friends and colleagues, I am in perfect form again. What really helped me pull through was this disgusting-tasting herbal medicine that cost 4 yuan (about 65 cents CDN) which came in little vials and which I had to drink through a mini straw three times a day for 4 days.

After the first day, I could see significant improvements and because it was so gross, I didn’t drink the rest of it. If I was 8 years old again, I probably would have poured it down the sink when my parents weren’t looking. In any case, it’s over, and I’m back to my “happy energetic” self, as someone has observed. And after a bout of feeling sorry for myself, Tonia and some of the girls from the office came all the way to our flat to give me this gorgeous bouquet of flowers, a dozen roses and several lilies. They had heard I was sick and came to see how I was feeling. I was truly touched.

This past weekend of teaching has been the best so far.

I realize that sometimes the less preparation I do, the better it is. I just have to be aware of what unit and topic we are at, have a few songs and games in the back of my mind and to just go and have fun with them. For the most part, these kids did not choose voluntarily to come and learn English on a Saturday/Sunday morning.

And because our method of instruction is so drastically different from the institutional education system of China, why shouldn’t we have an element of fun and games, of course all the while having a certain language learning aspect involved? The more I do this, the more I realize that learning a language isn’t about reading, grammar and spelling. It’s more to do with effective communication and the sharing of thoughts, ideas and opinions using a medium that both people can understand. What I love is how the kids absolutely adore singing. I sometimes really get into it and would just belt out the first two notes, and they would take it away. It’s awesome. 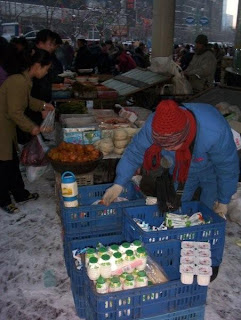 The best is singing with actions. Many of the songs we teach, from the book and from our own personal repertoire, include some form of TPR which can really be fun, and I catch myself actually laughing and enjoying myself from the pure joy of being amongst young children again. You know how the older we get, the more effort we seem to have to invest to get to a state of happiness and giddiness? I mean, it’s rare that we are truly happy and not thinking about how happy we are, we just are. Well, these kids can certainly bring the best out of a person if the conditions are right.

The opposite is also true. In one of my Sunday morning’s classes, I was teaching a class of sixteen 7-10 year olds in a very very narrow classroom, and so when I would be talking to a certain side of the classroom, it is likely that my back is to other students. It’s a bad layout of the classroom to say the least.

Anyways, I had my back turned to several of the students sitting in the back, and when I turn back to face them, I see Mike (a chubby kid with a lot of energy and a kind of tough exterior image) getting up from his chair, workbook in his two hands. He walks decisively across the room, which is literally two steps, and raises his book above his head and wacks the other kid in the head. Just like that. I grabbed him by the arm and dragged him outside of the room and had him stand there until the end of the class. We had a nice one-way chat afterwards. 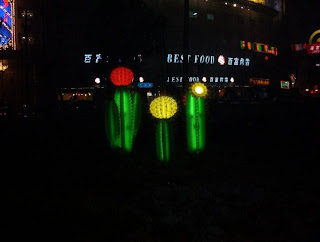 Discipline is something I don’t like doing and certainly not something I do well either, but I will do it out of necessity. We have these stickers for the young kids, a reflection of their work and overall behaviour in class each time. Blue stickers means you completed your homework, actively participated in class and perform well overall. Yellow means you participated but perhaps forgot to complete your homework. And red stickers means you were not paying attention in class, disturbing others, not listening, didn’t complete the homework, blah blah. These stickers are a great tool to use as a threat to the kids if they’re misbehaving. Just the mere mention of stickers and they shut up. I should have given Mike two red stickers that day.

Went for a late night swim after class on Sunday with Michael and Susi. Fabulous! Then we gourged on Uyghur “niuroa ban mian” (hand rolled noodles with spicy sauce and sheep) and several kewabs (long skewer which must be at least one foot long of tender meat and spices grilled to perfection). We then met up with several of the others for drinks and some good old live music.

It’s so funny to hear Chinese guys sing English songs, you wonder if they know what they are saying. They are quite good, and for a split-second you forget you are in a foreign country, until the song ends and they start talking in rapid-speed mandarin. On the side, I’ve been listening to some interesting Chinese rap and hip hop, and it isn’t as bad as one would think. The teenage girls in my classes are in love with Jay, apparently a seriously good-looking Hong Kong singer. I’m also being schooled in the field of German and Danish pop music, thanks to Susi’s music collection. Some of it’s actually pretty good! 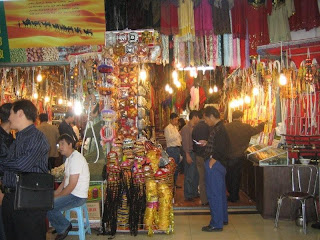 Dora has officially handed in her notice also and will be leaving the country in early December. She's had enough of it also, and her inability to move about due to her broken ankle doesn't help matters either, that and the fact that she is miserable from the breakup with Peta. So 3 teachers have quit in a span of 2 weeks. It's a bit of a crunch in terms of classes and teaching hours, but it'll all work itself out. Ian's a great boss and is always upbeat and positive. A funny British bloke he is, i reckon.

Dora’s brother is in town for a couple of weeks right now visiting from Australia, on transit to Scotland for a while before he decides what his next move is. Interesting guy, just finished writing a teen novel, studied Middle East history. Justine's father is in town also visiting from Australia, a retired pilot who is enjoying his freedom now. Met another EF teacher from Englad who is teaching north of Urumqi in a mainly Uyghur-town called Karamay. He just finished a year there, is going "the long way back" home (through Burma, India, etc?) for a holiday and returning to teach at a middle school. Interesting people with interesting stories. I love it! 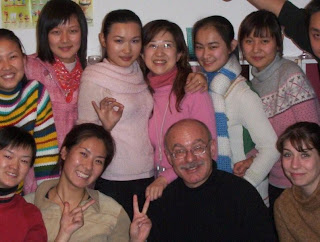 It's funny, we are all a bit eccentric and weird and we all have our little quirks. But even though we are all very different from each other, it just works. Michael, my fellow Ottawa-buddy, is settling in nicely and has had quite the culture shock from no hot water and gas for the first few weeks to breaking his key in the keyhole last night and having to sleep on our couch. He has done pretty well in my opinion in terms of getting his feet grounded and just learning how to cope with the language and cultural differences. He's adament about working out on a regular basis and so one day he ventured out to buy gym clothes and shoes.

He was in some department store and was trying to ask where the gym clothes section was by doing jumping jacks in front of the salesladies. They ended up sending him to another floor by elevator and when the doors opened, he found himself in the middle of an aerobics class! I guess you have to know Michael and understand how completely hilarious it is. Anyways, i went with him the next day to get some gym gear and we were a bit more successful this time!

Last week i made breakfast for everyone at our flat: pancakes, french toast, scrambled eggs, toast (with real bread and not the sweet bread that Chinese people seem to only adore), and of course banana bread! I brought a little bottle of maple syrup from Canada which everyone loved. 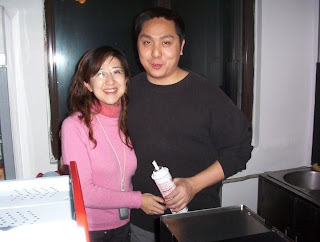 Tonight i went to a nearby coffee bar for a little party-get together thing with some students and teachers. It was Nicole's boyfriend, Jackie's, company. He's from Guangzhou (Cantonese speaking area in southern China) and is selling coffee/tea and coffee makers, tea pots, etc, to companies around the city. He also has a catering business and got me some powdered vanilla and CINAMMMON! Baking has suddenly become a lot more fun. Although he is completely fluent in Mandarin, I think he also likes the fact that he can speak Cantonese with me, his mother tongue.

Changes are happening quickly and daily. New teacher from the Czech Republic is arriving this Friday. A couple more from England and California are coming in early December. Our 2nd EF school in Urumqi is slotted to be opened on December 19th. We went as a team to see the new school, which is still under heavy construction. A lot bigger (15 classrooms) and with a huge conference room and computer lab.

Undecided whether or not i want to stay at this current school or move up to the new school... we are allowed to decide if we want to go or not. I'm trying to decide what is the best thing for me right now. Accommodations and travel time plays a huge factor. That, and the fact that i am comfortable with where i'm living and who i'm working with currently. Although i know that can change with the wind as i've noticed so far.