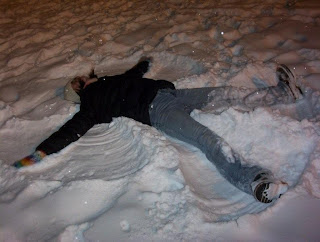 Well, exactly one year ago, I was on my way back to Canada from Zhuozhou, China. And less than a year later, i'm back - whoa.

Yesterday was a gorgeous day. Another wack of snow fell early in the morning. I opened our 4th floor kitchen window and screamed with delight—wheeeee. I totally embarrassed Susi, but whatever. Even Tiffany from the 6th floor could hear me. I realized that this is the first time that I have lived elsewhere other than Canada during winter where there was actually snow! It’s quite a feeling.

After a refreshing swim in the morning, Cath(erine), Tiff(any), Susi and I treated ourselves to a gorgeous spread of Brazillian food at one of the few international restaurants in town. I met two other foreigners who are friends with Cath and Tiff: Laura, a Louisiana girl who is here with her BF and doing her Harvard dissertation on the historical literature of West Africa and the slave trade, mainly in Ghana and Nigera (she and I reminisced about African markets, food, music and sunshine), and Dave Wong (half Chinese – half American) who is studying Uyghur and Chinese at the Xinjiang University, interested in calligraphy and from what I could gather, enjoys drunken karaoke escapades and baked goods. 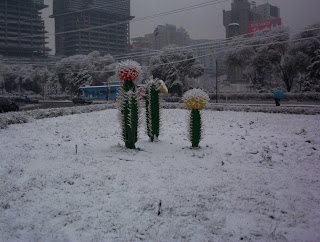 Anyway, lunch was delicious and well worth the elevated price. Women pay less than men at this buffet, because we apparently eat less. How blatantly sexist is this, but who am I kidding? When it comes to cheap or better yet, free, food it is no laughing matter. I quote Laura, who declared: “I love discrimination!”

And so while we got to dine in style, filling our plates with fresh veggies, SOUP, macaroni and potato salad, coleslaw, etc. as many times as we wanted to, men in cute little flower-patterned shirts walked around with skewers of meat, slicing bits and pieces off onto our plates.

On each table beside each plate, there is this little cut out of a cow which reads in green on one side: “Yes Please” (translation: bring it on. ‘It’ being the meat), and on the other side in red: “no thank you” (translation: stop shoveling more meat on my plate. Please.) It’s a good concept, but they don’t seem to pay attention to which side is facing up, and so every few minutes your conversation would be interrupted by a huge slab of beef, goat, lamb, chicken, or ? shoved into your face. 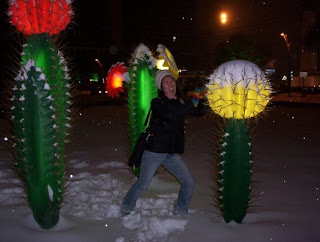 And then you have to say “wo bu yao” (I don’t want any). I say this a few times because generally I get the tones all mixed up (mandarin is a tonal language and depending on how your voice rises and falls, a slight mistake can be detrimental; this has been the root cause of many mystery dishes ordered at restaurants). And so after seeing a confused looking expression on the poor waiter’s face, who is really just doing his job, he turns and walks away, only to return minutes later with more meat.

Apparently if you come for the dinner buffet, there is live Brazilian music, whose musicians are actually imported from Brazil for the sole purpose of performing every evening. Management does it so they are on a rotating basis. One of our past EF foreign teachers had a fling with one of them, only to leave him hanging when she was fired. Ah, another broken heart.

On the work front, Dora broke her ankle yesterday. She is now in a cast, with crutches and out of commission for 2 weeks. A bunch of them went out after class and while she was play kungfu-fighting with Laura, a part time EF teacher from Scotland who is also studying Uyghur at the uni, she must have hurt it. 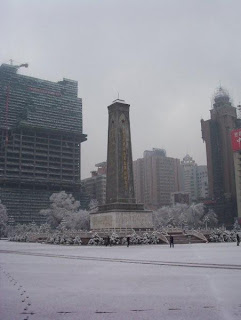 There is this place near school which we sometimes frequent called “the pool bar”, a very grimy and dingy place underground with naked bulbs hanging sporadically around the bare hall. There are a lot of pool tables, very few customers and hard wooden tables with equally as hard wooden benches. As a rule of thumb, this is a place where one should really only go when one is already drunk. The only good thing about it is that we can bring all of our own liquor and provide our own music. They really don’t care and rumour has it that it’s only a matter of time that authorities will close it down. In any case, Dora has now earned herself a medical holiday, which I personally think will do her a hell of a lot of good for her mental health. 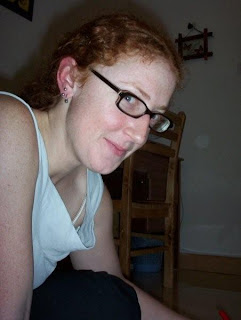 More bad news: Tiff just handed her notice in today. She decided that she’s had it with teaching little kids, and the stress on the weekends is just too much with the intense pressure to perform well in class. Our Sat and Sun start at 10:15am and we are all pretty much going full force until 9:15pm. It’s a long day, tiring on the feet, and extremely exhausting by Sunday evening. The reason for this is because we are a language academy and we do classes primarily on the weeknights and weekends.

You can’t get around it, but it just translates to chaotic a sat and sun, with more rest during the weekdays. I’m already up to my maximum teaching hours, according to the contract, and it is a lot. I have 5 kid classes (7-10 year olds), 2 teen classes (11-14), 1 adult class (15+), and 2 VIP classes (one on one, where the student gets total attention from one foreign teacher. Those who are wealthy enough to afford these are really the elite in Urumqi. Even I wouldn’t pay that kind of money in Canada for a private tutor!)

So Tiff will be leaving our team in 10 days, but at least she will be staying in the city. She loves Urumqi and is looking into teaching at another English school around the corner from us, that teaches only adults. It’s kind of a pity, she is a real sweetheart and I think she was a wonderful asset to the team, but on the other hand, I admire her for taking a stance and righting her position if she is unhappy.

Sometimes it’s easy to just stay somewhere because it’s comfortable but her reason is that if she came halfway around the world to do something, she wants to be happy. Fair enough, tough cookie. 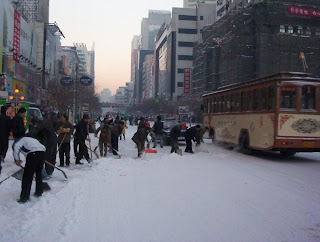 Being Canadian and all, I’ll talk more on the weather: As the snow stopped falling today, and the Urumqi-nites walked, biked, skidded, and squealed all over the roads, the white fluffy stuff took no time to turn to black icky slush. It’s funny to see hundreds of shopkeepers and soldiers out with their heavy metal shovels wiping the stuff off the curbs and steps. It seems that when there is snow on the ground, everyone walks on their tiptoe with their head down to mind their next step, probably praying desperately to Buddha/Allah to spare them from falling on their bums. 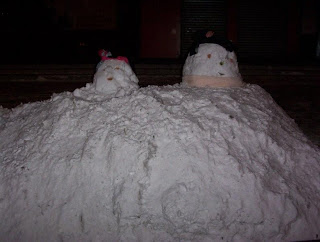 I stopped across one of those pedestrian bridges that are like safe routes to take when you don’t want to chance crossing the busy roads, and while looking down at the traffic, I noticed how the pedestrians seemed to move at the same frantic pace as they normally do, but in smaller steps and might I add, like they all had a pickle up their ass. But I digress, I am guilty of this also; I just find it slightly amusing.

Oh but the best part of today: I got me a coffee press! Wait, what is the right term for those things? It’s those big cups with a plunger-looking-thingy that can make real coffee. Goodbye to crappy instant Nescafe!!

Lesson of the day:
Q: How does one cope with the insanity of slush, mental anguish from work and the social discomforts of colleagues and friends?
A: Overpriced all-you-can-eat buffets and a cheap coffee plunger. Simple pleasures.
on November 09, 2004